Sachin Pilot Chose Not To Wear Traditional Turban. Has An Election Link

Congress' Sachin Pilot had said he will only wear the 'Safa', a traditional Rajasthani turban, till the party emerges victorious in Rajasthan. 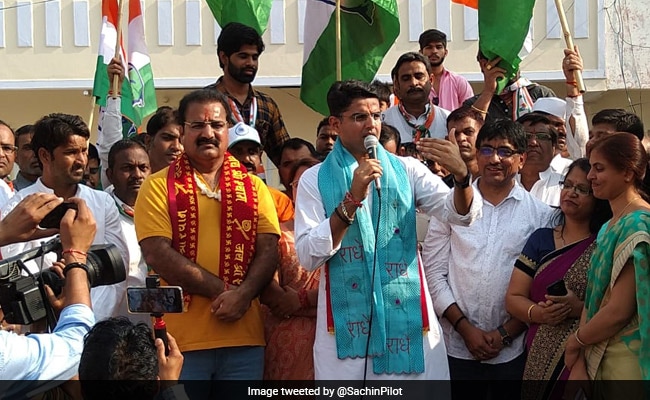 Rajasthan Congress chief Sachin Pilot said he is confident of victory in the state.

Rajasthan Congress chief Sachin Pilot is hoping to not just celebrate a Congress win in Rajasthan, but also sport 'safa', a traditional turban, after four years. In 2014, he had pledged to not wear the traditional headgear till the party returns to power in the state.

Mr Pilot exuded confidence that the Congress will form the government in Rajasthan and he will wear the 'safa' once again, after the results for assembly polls, scheduled to be held on Friday, are announced on December 11.

"After the party suffered a major defeat in 2014, I pledged to not wear a 'safa' till it returns to power. I decided to give up wearing the 'safa', which I love wearing as a symbol of culture," he told news agency PTI Wednesday when asked about his resolution.

Mr Pilot said people gifted him 'safas' on several occasions while he was campaigning for the assembly polls. Instead of wearing them, he said, he would put them down after touching them to his forehead.

"I am quite hopeful that people's blessings will make sure that the Congress wins the elections and I will be able to wear the 'safa' once again," he said.

The 41-year-old Congress leader is contesting the state poll for the first time from Muslim-dominated Tonk constituency. He is pitted against BJP candidate Yoonus Khan. Mr Pilot has been a former MP from Dausa and then from Ajmer.