"40 years to the day I first came to Moscow. The world has changed but India-Russia relations remain steady," Mr Jaishankar said on Twitter. 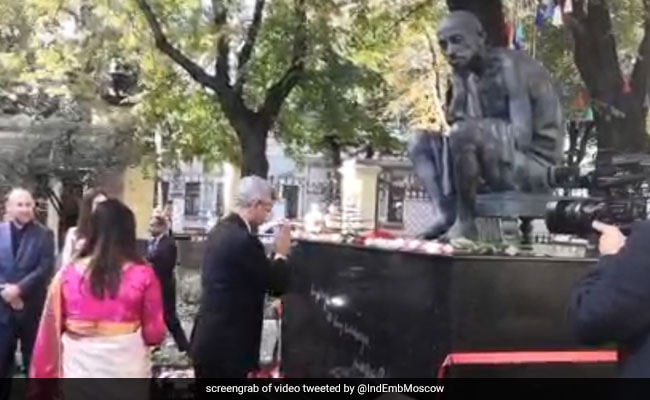 External Affairs Minister S Jaishankar on Tuesday unveiled a statue of Mahatma Gandhi at the Indian embassy in Moscow.

Mr Jaishankar arrived in Moscow earlier in the day on a two-day visit.

He also addressed the Valdai Discussion Club, a Moscow-based think tank, on "India's perspective on the Indo-Pacific."

"40 years to the day I first came to Moscow. The world has changed but India-Russia relations remain steady," Mr Jaishankar said on Twitter.

"The changing world has thrown up new concepts and approaches. Discussed one of them- the Indo-Pacific at the Valdai Discussion Club," he added.

The minister is scheduled to meet his Russian counterpart Sergey Lavrov on Wednesday to further advance bilateral cooperation and prepare grounds for Prime Minister Narendra Modi's upcoming visit to the country.

PM Modi will be the chief guest at the Eastern Economic Forum (EEF) in Vladivostok which will be held from September 4 to 6.

The two leaders will discuss a range of regional and international issues of mutual interest, including trade, investment, military, science and technology cooperation, the use of national currencies for mutual payments and prospective projects in space exploration and energy.

"They will also discuss Russia's upcoming BRICS presidency as well as a range of regional matters, including efforts to preserve the Joint Comprehensive Plan of Action on the Iranian nuclear programme, developments in the Persian Gulf, and the situation in Afghanistan," a statement by Russian Foreign Ministry spokesperson read.

This is S Jaishankar's first visit to the Russian capital after assuming office in May, during which he will also co-chair the India-Russia Inter-Governmental Commission - Technical and Economic Cooperation.