"Offered prayers this morning at the Devasthana of Bangkok. Received the blessings of Phra Maharajaguru Vidhi. Underlines our shared religious and cultural traditions," S Jaishankar said in a tweet. 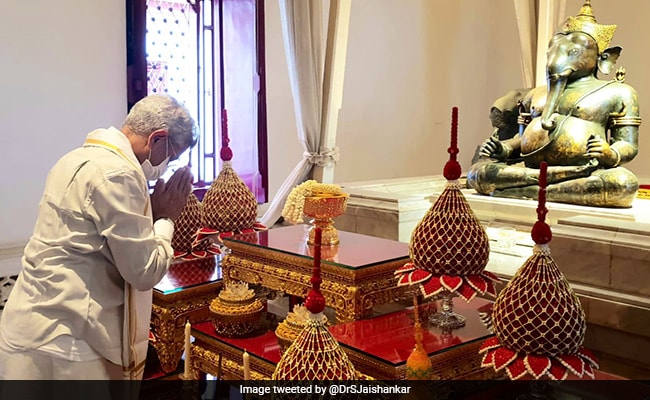 External Affairs Minister S Jaishankar, who is in Thailand to attend the 9th India-Thailand Joint Commission Meeting, offered prayers at the Devasthana at Bangkok on Thursday morning.

India and Thailand are celebrating 75 years of establishment of diplomatic relations.

Underlining the shared religious and cultural traditions between both countries, the EAM said he received the blessings of Phra Maharajaguru Vidhi.

"Offered prayers this morning at the Devasthana of Bangkok. Received the blessings of Phra Maharajaguru Vidhi. Underlines our shared religious and cultural traditions," Mr Jaishankar said in a tweet.

Offered prayers this morning at the Devasthana of Bangkok.

Earlier, the 8th Joint Commission Meeting (JCM) between India and Thailand was held on 10 October 2019, in New Delhi. The Indian side was led by Mr Jaishankar and the Thai side was led by Don Pramudwinai, Minister of Foreign Affairs. The JCM was preceded by the Senior Officials Meeting held on October 9, 2019.

The Ministers had a restricted bilateral meeting, which was followed by delegation-level talks. During the meetings, both sides reviewed the progress made in all areas of the bilateral relationship, including political, defence and security, economic and commercial, connectivity, cultural, tourism and people-to-people ties.

Thailand is the Chairman of ASEAN for 2019 and also country Coordinator for India-ASEAN Strategic Partnership for 2018-21.