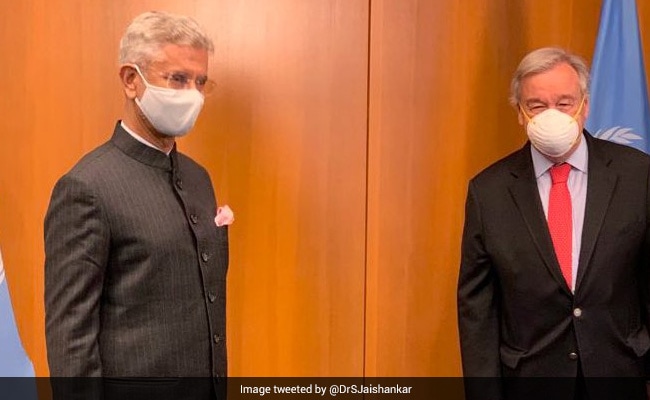 S Jaishankar appreciated the efforts of the Secretary General to facilitate 'Vaccines for All''.

In his first face-to-face interaction with the UN chief since India entered the UN Security Council as a non-permanent member in January this year, Mr Jaishankar also deliberated on regional challenges in India's neighbourhood and said that the countering terrorism and radicalisation remain priorities for the entire region.

"A warm and comprehensive meeting with UN Secretary General Antonio Guterres. Discussed the Covid challenge, underlining the importance of finding urgent and effective global vaccine solutions. Critical to ramp up the vaccine supply chain to ensure greater production and fairer distribution," S Jaishankar tweeted after the meeting that lasted almost an hour.

S Jaishankar's meeting with Mr Guterres comes at a time when the country is reeling under an unprecedented second wave of COVID-19 and a widening gap between the supply of vaccines and requirements.

Currently, the country is using two "made-in India" jabs - Covishield and Covaxin - to inoculate its billion-plus population and has administered 20 crore doses since launching the world's largest vaccination drive in mid-January. A third vaccine, Russian-made Sputnik V, has been approved by the government and is being used on a smaller scale at present.

According to a statement issued by the Permanent Mission of India to the UN, the Secretary General expressed solidarity with the government and the people of India in their efforts against the recent wave of COVID-19 pandemic.

S Jaishankar appreciated the efforts of the Secretary General to facilitate 'Vaccines for All''.

He and Mr Guterres discussed the need to ramp up global vaccine production through expanded supply chains. "This was imperative to ensure fairer distribution of vaccines globally in the coming days. The proposal by India and South Africa for TRIPS waiver of vaccine patents can also contribute to greater production and more equity," the statement said.

Stephane Dujarric, Spokesperson for the UN chief, told PTI that Guterres had a "very good discussion" with Jaishankar. "They discussed COVID-19, the issue of vaccines and also a number of other peace and security issues in general," Dujarric said.

In a series of tweets, S Jaishankar said he also exchanged views on climate action. "Greater resources are essential for larger ambitions. Financing will determine our seriousness and credibility," he said.

S Jaishankar apprised the Secretary General of India's efforts to meet its Paris commitments, enhance renewable energy goals, as well as its leadership role in the International Solar Alliance and Coalition for Disaster Resilient Infrastructure.

S Jaishankar outlined India's priorities for its Presidency of the Security Council in August 2021, including high-level events on Maritime Security and on Technology and Peacekeeping. He underlined India's strong development partnership with Africa, Small States and Small Island Developing States.

"The Secretary General conveyed his appreciation for the consistent role played by Indian peacekeepers in support of international peace and security," the statement said, adding that response of the Indian peacekeepers in aiding the people of Goma in the Democratic Republic of Congo following the volcanic eruption was "recognised".

"Never Been So Excited And Indifferent": Zomato CEO On Day Of Listing