S Jaishankar concluded the two-day event with a bilateral meeting with his Japanese counterpart Toshimitsu Motegi. 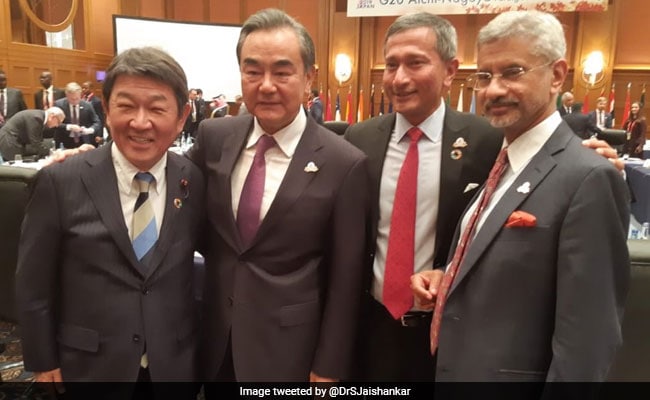 S Jaishankar with the Foreign Ministers of Japan, China and Singapore

External Affairs Minister S Jaishankar on Saturday interacted with his counterparts from several countries as he attended the G20 Foreign Ministers' meeting.

Mr Jaishankar concluded the two-day event with a bilateral meeting with his Japanese counterpart Toshimitsu Motegi.

He also held "interesting conversations" with foreign ministers of Republic of Korea, the Netherlands, Singapore and China.

The minister also held talks with the Foreign Minister of Spain Josep Borrell on the "future of our ties with the EU."

"Delighted to meet FM @JosepBorrellF of Spain. A very warm conversation on the future of our ties with the EU," he tweeted.

He had a "good discussion" with Jean-Baptiste Lemoyne, French Minister of State attached to the Minister for Europe and Foreign Affairs.

"A good discussion with French MoS @JBLemoyne on the Indo-Pacific strategic landscape," Mr Jaishankar said in a tweet.

He also met Chilean Foreign Minister Teodoro Ribera Neumann on the sidelines of the event.

"Preparing the ground with Chilean FM @TeodoroRiberaN for expanding cooperation," he tweeted.