S Jaishankar also appeared to take a dig at former National Security Adviser Shivshankar Menon when he said agreements with Pakistan like at Sharm El Sheikh and Havana lacked "strategic clarity" and had done "harm" to India. 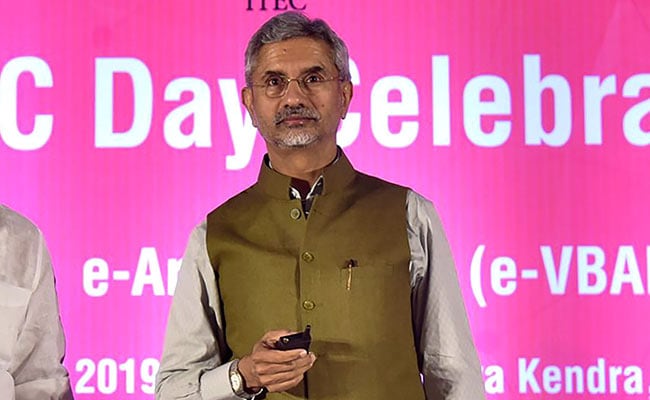 External Affairs Minister S Jaishankar on Monday defended the NDA government's decision in 2016 to allow a Pakistani probe team including officials from spy agency ISI to visit the Pathankot air force base to probe a terror attack.

Speaking at a book release event, S Jaishankar also said that no country has been battered by terrorism the way India has been and that efforts to "normalise" terror must be defeated.

S Jaishankar also appeared to take a dig at former National Security Adviser Shivshankar Menon when he said agreements with Pakistan like at Sharm El Sheikh and Havana lacked "strategic clarity" and had done "harm" to India.

Last week, Mr Menon slammed the government over the Citizenship Amendment Act, saying India had "isolated" itself at the global stage by enacting the law.

S Jaishankar also said India allowed issues like citizenship, Article 370, Ayodhya and GST to fester for a long time, adding China was impressive in looking for solutions to problems and it "is a big learning opportunity" for India.

In a clear reference to Pakistan, he said India should never ever allow terrorism to be normalised.

"The perpetrators of terrorism will try to normalise terrorism, will try to pass it as another instrument and as ''one more thing we do''.... They are playing a game, but we should not ever play their game," S Jaishankar said.

"So, sometimes, when we don't have strategic clarity and we have had occasions like Sharm-al-Sheikh and Havana, where we have allowed victim and perpetrator to try and come on the same plane. I think we have done ourselves harm," he said.

He said the NDA government did not put the victim of terror and perpetrator of terrorism on the same plane by allowing the Pakistani team to visit the Pathankot air base as part of the joint investigation into the Pathankot terror attack case.

"I do not think Pathankot put the two (victim and the perpetrator) on the same plane. It was very clear. And this government is very clear on who the victim is and who the perpetrator is. That has been a consistent narrative and it stays that way," said S Jaishankar.

"The investigation that happened was to pressurise the Pakistanis so that they did not have an excuse to say that ''well, we made an offer and you did not accept it and therefore, it trailed away''. The idea was: Look, you ask me anything reasonable, I will agree and now you go and act," S Jaishankar said.

The opposition Congress had attacked the Modi government for allowing the visit by Pakistani probe team, alleging it had betrayed the country's national interests and its security.

The External Affairs Minister appeared to be critical of past government for not making adequate attempts to find solution to long-pending problems.

"To me, the big concern I have is, after years of doing it (kicking can down the road), today we have accumulated a legacy of problems. And if you see what is happening today in this country, these problems have caught up with us," S Jaishankar said.

"The last two years have been very active years of debate, argumentation and decision-making. We tend to see them as individual issues and with some reason. But I want to see them as a trend," he added.

He said a lot of complex issues being resolved by the current government were accumulated over a period of time.

"Look at the citizenship issue. Citizenship issue started 40-50 years ago. Rajiv Gandhi did an agreement in Assam in 1980. You look at (Article) 370. I mean, 370 was a temporary article if you look through the Constituent Assembly papers," said S Jaishankar.

"The general sense then was that within a few years we will resolve the issue of 370, but not for 70 years. Look at Ayodhya, show me where in the world would you have an unresolved problem for 150 years. So, we have let problems be there for 50 years, 70 years and 150 years," he said.

Talking about GST, he said it was obvious that India needed a single-tax system, but people kept kicking it down the road.

"Even our social problems and economic problems, a lot of it - we tended - to put it off. So, to my mind, the big learning out of China is unless a society has a mindset to decisively address its current issues, you are not going to walk the world (confidently)," he said.

He said China's systemic mindset has been to decisively address its current issues.

"In order to articulate the rise of China and what it means for India and the world- we need to look at how the Soviet Union and United States became global powers," he said.

They accomplished it over a large time period whereas China's rise has been significantly faster, he added.