The Rashtriya Swayamsewak Sangh (RSS) does not give advice, but offers suggestion if it is sought, Mr Bhagwat said, without naming the Bharatiya Janata Party (BJP) or any of its leaders. 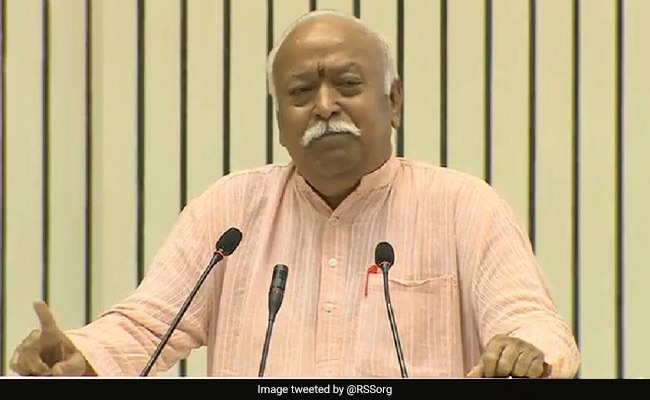 Impression that calls from Nagpur are made to the government absolutely wrong, Mohan Bhagwat said

RSS chief Mohan Bhagwat said on Tuesday that his organisation does not dictate the BJP either on politics or on policies of its government, but asserted that it pushes for what it believes to be in the interest of the country.

On the second day of a three-day conclave organised by the RSS, Mr Bhagwat said yesterday that the impression is "absolutely wrong" that calls from Nagpur, where it is headquartered, are made and talks (between RSS and government functionaries) are held because likes of the President and the Prime Minister have had some link with it.

Mr Bhagwat also said that the RSS never asks it volunteers to work for a political party.

The Rashtriya Swayamsewak Sangh (RSS) does not give advice, but offers suggestion if it is sought, Mr Bhagwat said, without naming the Bharatiya Janata Party (BJP) or any of its leaders.

The RSS head spoke at length about its stand on politics, and claimed that it does not ask its 'swayamsewaks' (volunteers) to support a particular political party but advise them to back those working in the interest of the country.

"We speak about interests of the nation and if we have strength, then we push for what we consider to be right. There is nothing to hide here. We do it openly," he said.

"We never ask a volunteer to work for a political party. But we do say that they should back those who are working for the nation and have a dream for the nation. Anyone (political party) can have such a policy. It is not that only one has it and another cannot have so," he said.

He referred to the issue of illegal infiltration, saying his organisation may keep away from politics but will speak about a matter like this as it impacts the country.

Without naming the BJP, which is ideologically affiliated to the RSS, Mr Bhagwat said his organisation is often asked about its political ambitions, why so many of its people are in one party and what is its association with politics.

"It is asked why so many of them (RSS workers) are one party. This is not our concern. Why they do not wish to be associated with other parties is for them to consider. We never ask a swayamsewak to work for a particular political party," he told the audience at Vigyan Bhawan in Delhi.

The opposition has often accused the RSS of actively interfering in politics through the BJP, with Congress president Rahul Gandhi alleging that the organisation seeks to capture institutions with help from the Modi government.

In the BJP, which Mr Bhagwat did not refer to directly, he said many leaders are older and senior to him and have more experience in politics than he has in the RSS. "If they need advice and seek it, then we give them," he said, adding that the RSS wants the BJP to work autonomously.

The centre of power will remain as has been decided by the Constitution, he said, adding that his organisation considers it wrong if it is dictated from the outside.

The Sangh is wedded to national interest, and is does not believe in nursing enmity with one or having special friendship with another, he claimed.

It works for man-making but what its volunteers will do, it their decision, he said, claiming that no office-bearer of the RSS can hold a position in a political party because it has decided to keep away from politics since its inception.

The nation does not rise from any single individual, institution, organisation or government, he said, adding that when the entire society sacrifices for the nation, it is only then that its destiny changes.