The CPI(M) state secretariat, in a statement, opposed the allegations of JP Nadda against the Left government and termed it as "propaganda" which the public would brush aside. 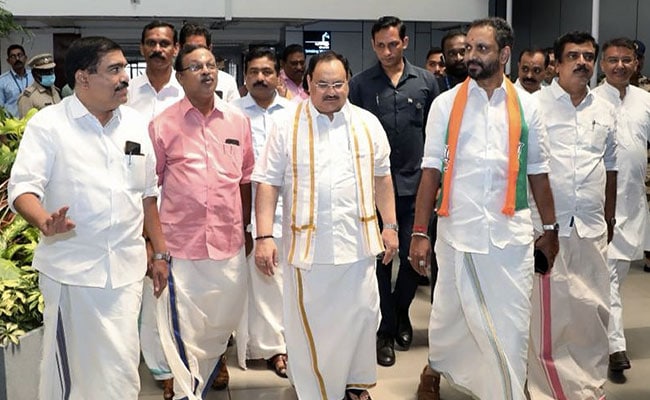 A day after BJP chief JP Nadda alleged that Kerala was a "hotspot" for terrorism and a "debt trap", the ruling CPI(M) hit back by claiming that RSS was at forefront of plans to cause riots in the state and that the Centre should disclose the financial liabilities allegedly created by it.

The CPI(M) state secretariat, in a statement, opposed the allegations of Nadda against the Left government and termed it as "propaganda" which the public would brush aside.

Nadda, on Monday, had alleged that communal tensions were on the rise and there was tacit support of the Left government to those who create and promote violence.

He had also claimed that alleged lack of financial discipline of the state government has pushed Kerala into a debt trap and that the ruling dispensation was corrupt as the "heat of the gold smuggling scam has reached the Chief Minister's Office."

Responding to these allegations, the CPI(M) state secretariat said "during LDF rule in Kerala there have been no communal riots here" and it has been able to "nip in the bud any conflict" sought to be initiated allegedly by the Sangh Parivar.

It claimed that the BJP chief's allegations were propaganda against a state which is known for its religious harmony in the country and that it was "clearly evident that RSS was allegedly at the forefront of deliberate attempts to cause riots in the state." It also alleged that people know that RSS was behind the killing of 17 CPI(M) activists in the state in the last 5 years.

On the corruption allegations against the Left government, the CPI(M) said various studies have indicated that Kerala government has a corruption-free system and it would be "political blindness" to allege the contrary.

Regarding the gold smuggling case, the Left party said that it was being probed by central agencies and everyone knows why there was ambiguity or lack of clarity regarding who sent the gold and for whom it was meant.

It also alleged that everyone knows that Swapna Suresh, a main accused in the case, was being protected and supported by the Sangh Parivar which was also spreading false news through the media to turn the public against the government.

The Left party also responded to the allegation of the state being turned into a debt trap by the ruling dispensation, by saying that "those worried about Kerala's debt should disclose the financial liabilities created by the central government."

It also said, in its statement, that the "financial crisis being faced by the state was due to the wrong policies of the Centre" which has "cut short Kerala's revenue sources by reducing its share in central taxes and stopping GST compensation." "Those who even reduced the number of work days under the guaranteed employment scheme are now coming forward with figures of welfare measures done by them," it said.

It further said that the state government was availing loans only with the approval of the central government.

The CPI(M) said that the people were well aware of the moves to weaken the development activities in the state using the authority of the Centre.