Robert Vadra is expected to appear before the Enforcement Directorate today in connection with purchase and possession of certain immovable assets in London. 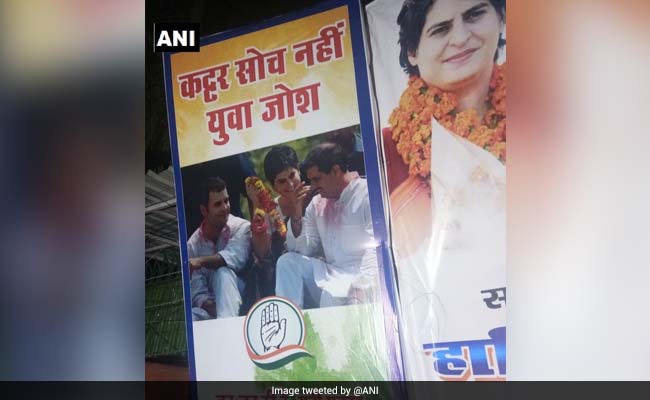 The Congress party claims that the posters, put up outside the party headquarters, was a BJP conspiracy.

Posters showing Congress chief Rahul Gandhi, his sister Priyanka Gandhi Vadra and her husband Robert Vadra, which appeared in front of the Congress headquarters in Delhi on Tuesday, provided the BJP the perfect opening for an attack this morning.

The posters had been put up to welcome Ms Gandhi Vadra, who returned from a trip abroad to take charge of the party yesterday as its general secretary for eastern Uttar Pradesh. But the BJP focussed on the fact that Mr Vadra, who has been named in several corruption cases, had to appear before the Enforcement Directorate for questioning this afternoon. The case involves certain properties in the UK that allegedly belong to him.

As BJP leaders tweeted their jibes, many of the posters went missing.

The Congress said the removal of the posters from the nearby roundabout and the rest of the area - usually done by the civic body NDMC - was "dirty politics". The NDMC is controlled by the BJP and the Congress  said they are in no hurry to clean up when BJP posters adorn the road.

Mr Vadra had claimed that he is being targeted in a political witch hunt.

The BJP attacks on the Congress over him have sharpened since Priyanka Gandhi Vadra joined active politics.

"Poster of two criminals have been put up in front of the Congress office. Both of them are out on bail. Criminal no.1 Rahul Gandhi in connection with National Herald case and criminal no.2 Robert Vadra who has to appear before ED today in connection with money laundering case," BJP's Sambit Patra said.

The BJP has also ridiculed Ms Gandhi Vadra's appointment, pointing out that Robert Vadra would be her big liability.

In a strong message to the BJP today, Priyanka Gandhi Vadra dropped off her husband at the central Delhi office of the Enforcement Directorate.

"I stand by my husband," she told NDTV, adding that she wanted to send a "clear message" by her appearance at the ED office.