"Rule 12" Used By PM To End President's Rule In Maharashtra

The explanation from Ravi Shankar Prasad came amid Congress questions about the revocation of the President's Rule in the state. 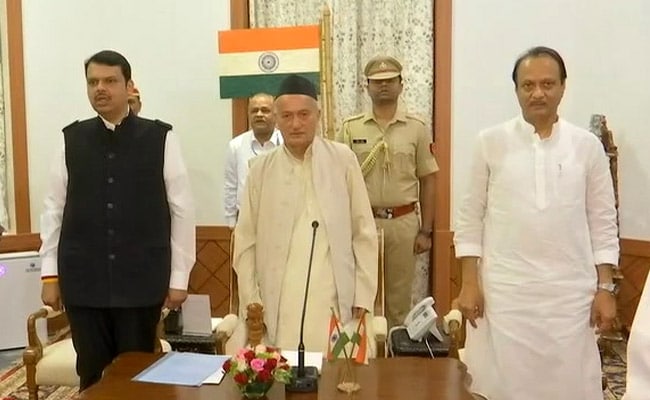 In a stunning comeback this morning, Devendra Fadnavis took oath along with Ajit Pawar as his deputy

The BJP on Saturday said the move to end President's Rule in Maharashtra, that was followed by the oath ceremony of Devendra Fadnavis as the Chief Minister, was legally sound as it has been done under Rule 12 of the Allocation of Business Rules 1961. The rule says the Prime Minister can take a call on the matter to "meet a situation of extreme urgency or unforeseen contingency".

The explanation from Union Minister Ravi Shankar Prasad came amid Congress questions about the revocation of the President's Rule in the state. Sources said it had been done before 6 am.

According to rules, imposition or revocation of President's Rule needs a go-ahead from the Union cabinet. But in this case it was Prime Minister Narendra Modi who gave the green signal.

Officials said under Rule 12, the Prime Minister has special powers to bypass the need for Union Cabinet's recommendation for revocation President's Rule in Maharashtra.

The rule also stipulates that to invoke it, the proposal should be accompanied by a "detailed justification clearly bringing out the urgency involved in the matter and the exceptional circumstances that require it to be processed under Rule 12".

After weeks of twists and turns in the Maharashtra story, the BJP made a stunning comeback this morning, with Mr Fadnavis taking oath along with Ajit Pawar of Nationalist Congress Party as his deputy.

The early hour, combined with the fact that few were present on the occasion, has been questioned by the Congress. Sena's Sanjay Raut had accused the BJP of moving like "thieves in the night".

On Friday evening, the NCP had pledged support to an alliance with the Shiv Sena-led and the Congress at a meeting where Ajit Pawar was present as well.

"From the day the results were announced to this day... no party was able to form the government. Maharashtra was facing many issues, including farmer issues. So we decided to form a stable government," he said after the oath ceremony.

Ajit Pawar's uncle Sharad Pawar, the chief of the NCP, said his party is still with the Shiv Sena and that his nephew had misled the Governor, handing him letters of support collected for the alliance. Reports suggested that Devendra Fadnavis has to prove his majority by November 30.