"Much To Learn From You": Robert Vadra Praises Rahul Gandhi On Facebook 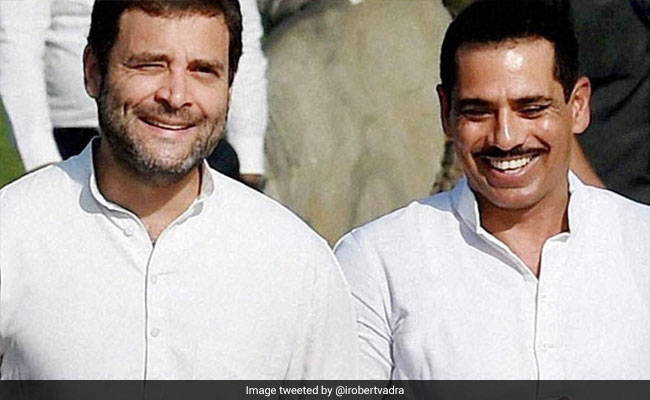 Robert Vadra supported Rahul Gandhi and said service to the nation is bigger than any party post.

At a time when the Congress is facing its worst leadership crisis, weeks after Rahul Gandhi resigned as the party president, his brother-in-law and businessman Robert Vadra today heaped praise on social media. "There is so much to learn from you," Mr Vadra, who is married to Rahul Gandhi's sister and Congress General Secretary Priyanka Gandhi, wrote on Facebook.

Mr Vadra said that service to the nation is bigger than any party post.

"The Indian populace, which comprises 65 per cent of the young - (under 45 years), looks up to you and other young leaders for direction," Mr Vadra said.

"You have shown tremendous strength of character and your decision to build the grassroots connect has been applauded by one and all," he added.

The support from Mr Vadra comes at a time when the Congress is looking for a successor to Rahul Gandhi as its party chief. Rahul Gandhi had put in his papers in May after the Congress could only manage 52 seats in the Lok Sabha polls, an improvement of just eight seats over its worst-ever performance in the national elections.

Mr Gandhi, now a lawmaker from Wayanad in Kerala, had earlier this week shared an open letter on Twitter, listing his reasons to quit from the top post. He also edited his Twitter bio, removing the party designation.

A rash of resignations has followed in the party after his decision to quit.