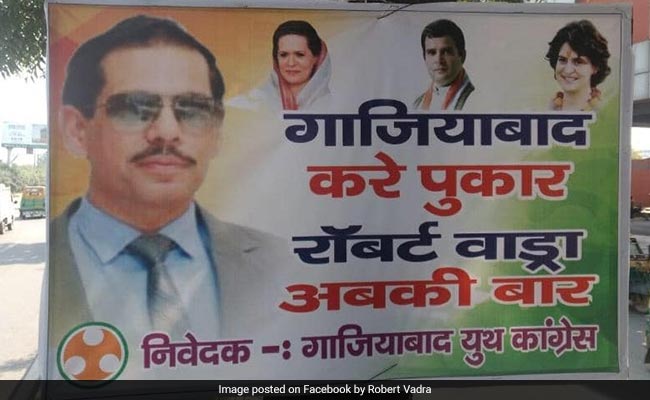 Businessman Robert Vadra, who had indicated his keenness to enter active politics, today said he would like to "serve people on a bigger platform" only after he is cleared of the charges against him. Mr Vadra, husband of Congress leader Priyanka Gandhi Vadra, shared pictures of posters urging him to contest the upcoming national election.

"Ghaziabad is calling, Robert Vadra this time," read a poster in Ghaziabad near Delhi.

"I surely have been serving n helping people in need for years, and would like to serve people on a bigger platform, but only once all false accusations & allegations levied on me are cleared (sic)," Mr Vadra wrote on Facebook.

He said he is "overwhelmed at the love of people" from different cities who want him to "fight elections from their areas".

Another picture shared by Mr Vadra,a poster in Haryana's Sonepat, credited to the "Sonepat Youth Congress", read, "Robert Vadra ji, you are welcome to contest the election from Sonepat.

Last month, he had also hinted that if and when he chooses to contest, he might do it from his hometown of Moradabad after similar posters appeared in the town.

The 50-year-old businessman is being investigated in a money-laundering case and has been through multiple rounds of questioning.

The Congress has, so far, played down the suggestion that Robert Vadra wanted to join politics. "It is up to the workers. Every person expresses himself. Everyone has the freedom to express themselves," Congress leader Sandeep Dikshit had said, reacting to the posters in Moradabad.

On February 24, Mr Vadra had dropped a big hint with a Facebook post saying that he was open to a "larger role in serving the people". Since then, there has been speculation that he could follow his wife's footsteps and enter active politics.

Priyanka Gandhi Vadra joined active politics in January and has been appointed as a Congress General Secretary. She will be in charge of the party's election campaign in eastern Uttar Pradesh.