Shakti Malik, a 37-year-old Dalit leader, was shot dead at his home on Sunday, according to a PTI report. 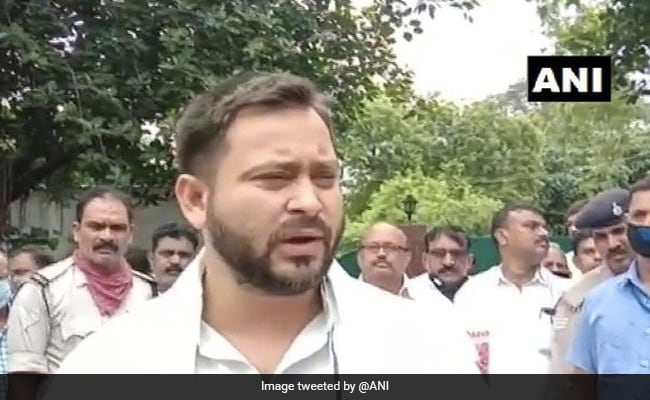 The RJD has strongly denied any involvement of Tejashwi Yadav in the killing.

The Rashtriya Janata Dal (RJD) has backed calls for a Central Bureau of Investigation (CBI) probe into the killing of Shakti Malik, a former member of the party, in Bihar's Purnea district. RJD leader Tejashwi Yadav and his brother Tej Pratap Yadav have been named in a case of murder filed on Sunday.

"We strongly deny these allegations...The chief spokesperson of Chief Minister Nitish's party (JDU), Sanjay Singh, has demanded a CBI probe into the case. We support this demand," RJD leader Shivanand Tiwari said today, alleging a political motive behind the allegation.

"Assembly elections are around. Naming the leader of the opposition and his elder brother in a murder case in these circumstances is part of a political conspiracy," Mr Tiwari said.

Shakti Malik, a 37-year-old Dalit leader, was shot dead at his home on Sunday, according to a PTI report. The police said three men on bikes barged into his home in the morning, shot him in the head while he was sleeping, and fled.

Mr Malik's wife alleged it was a political killing as Malik he was preparing to contest the Bihar Assembly elections, due in weeks, as an independent following his expulsion from the RJD.

Following his killing, an undated video surfaced showing Mr Malik accusing Tejashwi Yadav of demanding Rs 50 lakh for fielding him as a candidate from the Raniganj seat. He also accused Tejashwi Yadav of threatening to kill him.

Elections to the 243-member Bihar assembly will be held over this month and the next. The results will be announced on November 10.