49-year-old renowned filmmaker Rituparno Ghosh died at his south Kolkata residence on Thursday morning. The National Award winner was suffering from pancreatitis and died of a heart attack, his family said.
May 31, 2013 01:26 (IST)

Watch: The legacy of Rituparno Ghosh
For lakhs of his fans, Rituparno Ghosh was the finest filmmaking talent in Bengal; someone who probably would have ended up as a legend someday. But the life of one of India's most talented film directors has been cut short, leaving the entire film fraternity stunned.
May 31, 2013 00:51 (IST)
He was the Yash Chopra of Bengali cinema, says Amitabh Bachchan
May 31, 2013 00:50 (IST)
Filmmaker Mrinal Sen at the funeral 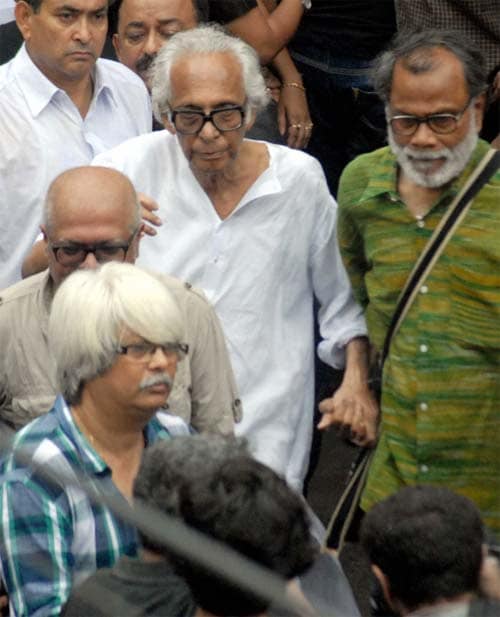 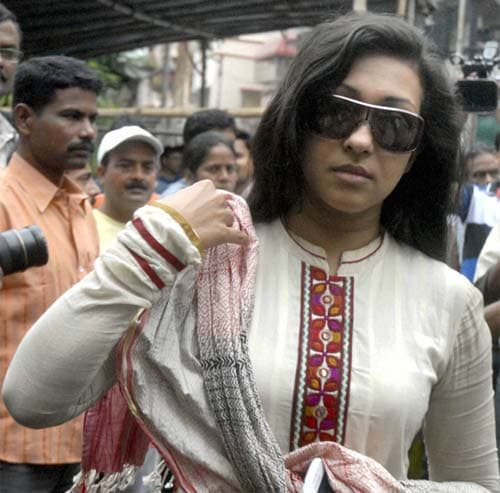 May 31, 2013 00:19 (IST)
We have lost a jewel of Indian cinema. To make films was like breathing to him, Rituparno Gosh has contributed a lot to the Indian cinema, says filmmaker Mahesh Bhatt

May 30, 2013 21:24 (IST)
Rituparno Ghosh cremated with state honours
May 30, 2013 21:15 (IST)
Chief Minister Mamata Banerjee was accompanied by her ministerial colleagues Arup Biswas, Boby Hakim and Bratyo Basu, a theatre personality himself, who broke down.
May 30, 2013 19:59 (IST)
Rituparno Ghosh received a gun salute at Siridhi crematorium. Mamata Banerjee, who was at the late director's house this morning, is also present at the crematorium.
May 30, 2013 19:46 (IST)
Acclaimed director Gautam Ghose on his way to pay his last tributes to Rituparno Ghosh. "I couldn't believe my ears when I was told this morning that Ritu is no more. He cannot go this way...I can't yet believe he is no more around." 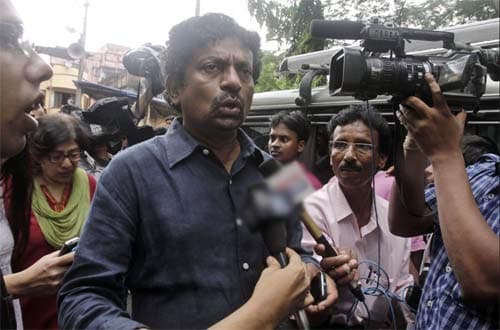 May 30, 2013 19:35 (IST)
Rituparno Ghosh's body has been taken to Siridhi crematorium from Technicians Studio. West Bengal chief minister Mamata Banerjee was present at the studio. 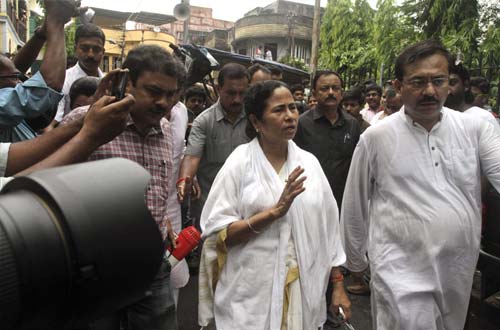 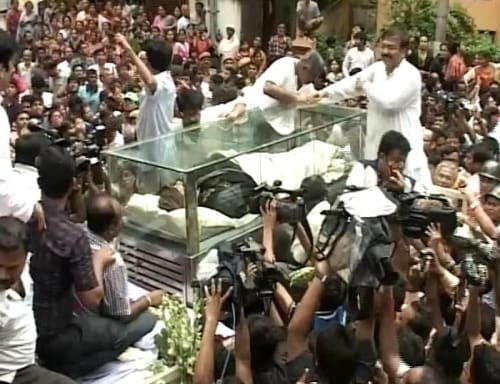 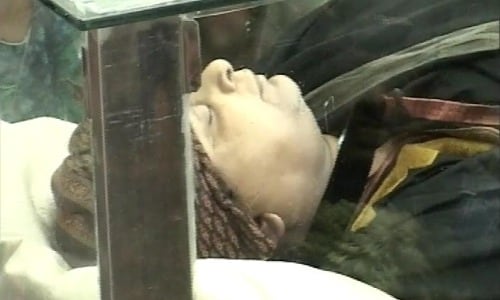 This is what they did to see his films.Today they do the same to say a last goodbyeyfrog.com/odcfmjzj 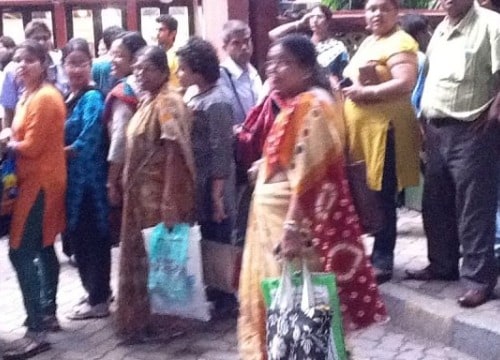 Absolutely shocked with the news of the passing of Ritu da. A dear friend and a great director and a wonderful, wonderful human. #RIPRituda

Had the honour of working with him in Antarmahal. Such a fine director. Will really miss his exuberance and zest for the movies and life.

Just realised that Ritu da was the only director that my family have all worked with individually. Pa- last lear, Ma- sunglasses...

Saddened to hear the news of Rituparno Ghosh - was always warm n humble.. Condolences to the family.. . RIP

Manish Tewari, Minister for Information and Broadcasting, said  in a condolence message, "I am deeply shocked by the tragic and premature death of Shri Ghosh. He was a creative genius who gave a new dimension to film making with every film that he was associated with. His films always left a deep imprint on minds of the audiences who were captivated by the honest portrayal of human emotions. Cinema has lost a visionary, as Shri Ghosh was always innovative and bold in undertaking new themes for his films. His death has left a void which will be very difficult to fill. I pray to God that his family gathers the necessary strength to overcome this crisis."

May 30, 2013 14:06 (IST)
Rituparno Ghosh's last completed film was the acclaimed Chitrangada (2012) which won a special jury award this year at the National Film Awards. The semi-autobiographical film tells the story of a choreographer preparing for a performance of Tagore's dance-drama Chitrangada while dealing with gender and identity. Rituparno wrote, directed and starred in the movie.
May 30, 2013 13:45 (IST)
Aishwarya Rai Bachchan starred in two of Rituparno's films: Chokher Bali (2003) and Raincoat (2004): 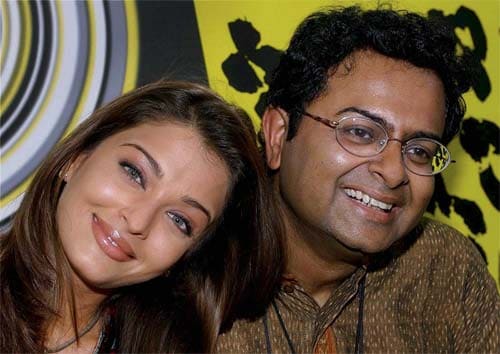 May 30, 2013 13:40 (IST)
Noted Kannada filmmaker Girish Kasaravalli said, "He never compromised in quality. We have lost a great character in the Indian film context."
May 30, 2013 13:15 (IST)
West Bengal chief minister Mamata Banerjee said "Bengal has lost a golden director." She also said that Rituparno Ghosh's body would be taken to Nandan, Kolkata's state-run cinema hall, for mourners to pay their last respects.
May 30, 2013 13:00 (IST)
Just two days ago, Rituparno Ghosh tweeted about his latest film:

Wrapped up the shoot of Satyanewshi, a crime thriller in the molten glow of the pensive falling afternoon.

May 30, 2013 12:58 (IST)
In 2003, Rituparno directed Chokher Bali, the film that brought him national prominence. Chokher Bali starred Bollywood superstar Aishwarya Rai Bachchan and Bengali tour de force Prosenjit. Actress Raima Sen featured in a star-making role. The film, based on Tagore's novel, won a National Award and Aishwarya's performance as a young widow in colonial Bengal was singled out for praise.
May 30, 2013 12:45 (IST)

Tragic news of film maker Rituparno Ghosh passing away - so young, so brilliant, a great experimenter in all cinema and life - a flame dies

May 30, 2013 12:43 (IST)
Among Rituparno Ghosh's most acclaimed films was 1997's Dahan, starring actresses Indrani Haldar and Rituparna Sengupta. They shared the National Award for Best Actress for their performances as a victim of molestation and a teacher who rushes to help.
May 30, 2013 12:40 (IST)

Shockd & saddend 2 hear of rituparno ghosh. It was grt wrking wit him in Raincoat &his way of looking at things was so diffrent and unique.

May 30, 2013 12:19 (IST)
Actress Kirron Kher, who starred in Rituparno's Bariwali, called him "the most prolific writer-director." She also described him as a very complex character, "very lonely at one level and friends with everyone at another level."
May 30, 2013 12:17 (IST)
Trinamool MP Derek O'Brien described Rituparno Ghosh's death as "a loss for advertising, Indian and international cinema."
May 30, 2013 12:13 (IST)
Rituparno Ghosh's first film as director was 1994's Hirer Angti starring Moon Moon Sen. His second film was the acclaimed Unishe April (1995) starring Aparna Sen and Debashree Roy. Unishe April won the National Award for Best Feature FIlm
May 30, 2013 11:50 (IST)
Chief Minister Mamata Banerjee visits the home of Rituparno Ghosh 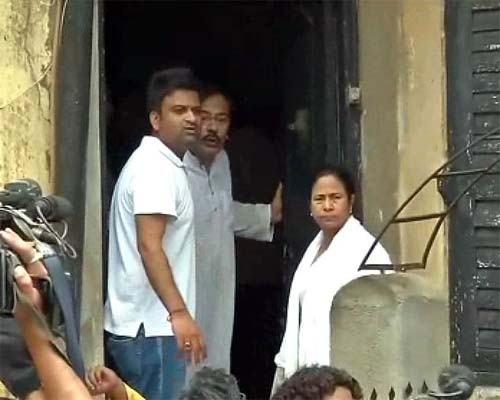 Shocked by passing of Rituparno Ghosh. He was dreaming of getting into what he called his 'next phase'. Hugely creative explorer on film


Saddened to hear about unfortunate demise of Rituparno Ghosh. He will be remembered for his brilliant filmmaking. May his soul rest in peace

Rituparno Ghosh had great sense of humour. He had a brilliant understanding of human behaviour. Will miss him and his cinema. RIP my Friend.

Absolutely numbed by the saddest news of Rituparno Ghosh not being with us anymore. Loss of a dear friend, adventurous filmmaker. Who taught me so much. A bit too premature departure, will always feel your void my friend. RIP.tl.gd/lu92ko 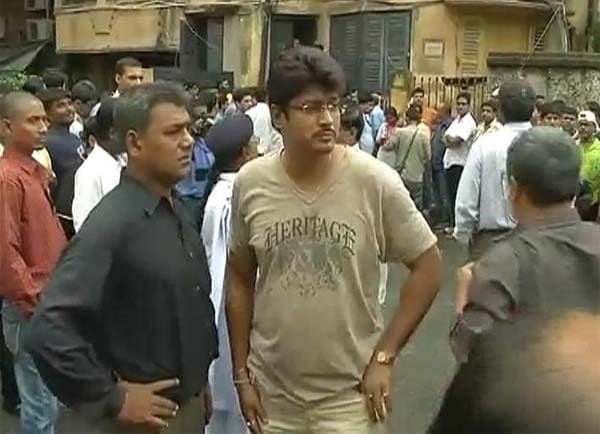