Earlier today, Members of Parliament from BJP and Congress gave Zero Hour notice in the Rajya Sabha over the issue of air pollution. 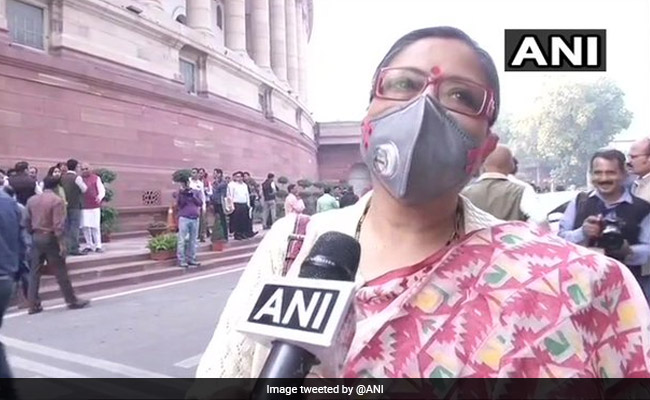 There is a need to think about increasing levels of air pollution, says TMC MP Kakoli Ghosh Dastidar.

Trinamool Congress (TMC) MP Kakoli Ghosh Dastidar was spotted wearing an anti-pollution mask while she was on her way to Parliament for the winter session.

"There is a need to think about the increasing levels of air pollution in the national capital. We need to rise above politics and come together to find a solution. We need to find a way to fight climate change," she said.

Earlier today, Members of Parliament from BJP and Congress gave Zero Hour notice in the Rajya Sabha over the issue of air pollution.

BJP lawmakers RK Sinha, Vijay Goel, GVL Narasimha Rao and Narendra Jadhav and Congress member KTS Tulsi have given Zero Hour notice in the matter in the Upper House of the Parliament.

Congress MP Manish Tewari and BJD lawmaker Pinaki Misra are expected to initiate a discussion on air pollution and climate change in the Lok Sabha today.

The discussion assumes significance as Delhi and its adjoining regions have been battling severe pollution levels due to different reasons including stubble burning by farmers in Haryana and Punjab.

The air quality of Delhi remains in 'unhealthy' category today. The Air Quality Index (AQI) at the Lodhi Road area showed no improvement in the air quality. The PM 2.5 was recorded at 135 while PM 10 was at 145 which fall into unhealthy category. Hazy sky was witnessed in several parts of the national capital.

The air quality is likely to plunge to the "severe" category on Thursday (November 21). The overall AQI in the national capital docked at 218, which falls in the "poor" category, as per SAFAR.