Farmers' Protest: Last evening, pop icon Rihanna asked her 100 million followers: "Why aren't we talking about this?! #FarmersProtest (sic)". Her post was widely shared, leading to a global outpouring of support. 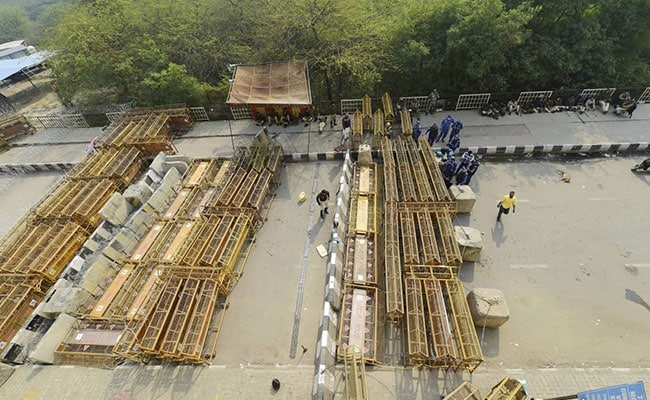 Farmers' protest against the centre's three controversial laws, which they say will leave them at the mercy of corporates, has seen a tremendous outpouring of support on social media in the last few hours as international pop star Rihanna, climate campaigner Greta Thunberg, and lawmakers from the United States and the United Kingdom tweeted about the agitation that began late November. Nearly a week after Delhi witnessed a massive tractor rally and subsequent clashes on Republic Day, multiple barricades and barbed fences have been put up on the outskirts, which the demonstrators have defined as "extreme measures".

In a statement, the government this morning said "a very small section of farmers have reservations about the reforms" that these laws aim to bring.  "Before rushing to comment on such matters, we urge that facts be ascertained and proper understanding of issues at hand be undertaken. Temptation of sensationalist social media hashtags and comments, especially when resorted to by celebrities and others, is neither accurate nor responsible," the Ministry of External Affairs said.

Last evening, pop icon Rihanna asked her 100 million followers: "Why aren't we talking about this?! #FarmersProtest (sic)". Her post - that had a report on internet ban at the protest sites - was widely shared, leading to a global outpouring of support.

British MP Claudia Webbe shared the post and wrote: "Solidarity to the Indian Farmers. Thank you Rihanna.  In an era where political leadership is lacking we are grateful for others stepping forward." Many others expressed solidarity with the demonstrators after the pop star's tweet. Punjabi pop singer thanked the international icon for joining the voices supporting the agitation.

Solidarity to the Indian Farmers.

In an era where political leadership is lacking we are grateful for others stepping forward#FarmersProtestpic.twitter.com/jdZnGWURBl

Salute to Rihanna for shedding light on the #FarmersProtest in #India - she is bringing needed attention to a movement silenced by Twitter and violently suppressed by the Modi government pic.twitter.com/x5GLJSjqPw

Thank you for your support✊ we need all the celebrities to support this peaceful protest #supportfarmers#nofarmersnofoodhttps://t.co/DRsY21YIGC

Lebanese-American model Mia Khalifa was also one of those who took to Twitter, joining the social media users posting about the restrictions at the protest sites.

"Paid actors," huh? Quite the casting director, I hope they're not overlooked during awards season. I stand with the farmers. #FarmersProtestpic.twitter.com/moONj03tN0

What in the human rights violations is going on?! They cut the internet around New Delhi?! #FarmersProtestpic.twitter.com/a5ml1P2ikU

US Congressman Jim Costa, a Democrat, used the hashtag posted by Rihanna - #FarmersProtest- and underlined he was "closely monitoring the situation". "The unfolding events in India are troubling. As a member of the Foreign Affairs Committee, I am closely monitoring the situation. The right to peaceful protest must always be respected. #FarmersProtest (sic)," his post on microblogging site read.

US Vice President Kamala Harris's niece Meena Harris also showed her support. "It's no coincidence that the world's oldest democracy was attacked not even a month ago, and as we speak, the most populous democracy is under assault. This is related. We all should be outraged by India's internet shutdowns and paramilitary violence against farmer protesters," she tweeted.

The unfolding events in India are troubling. As a member of the Foreign Affairs Committee, I am closely monitoring the situation. The right to peaceful protest must always be respected. #FarmersProtest

Thank you for raising your voice✊ #supportfarmershttps://t.co/2ATz10l3ep

A petition has also been filed in the UK parliament, calling for the safety of demonstrators.

Yesterday, Delhi Police Commissioner SN Shrivastava had said the barricading was strengthened at the protest epicentres after last week's clashes.  "I am surprised that when tractors were used, police were attacked, barricades were broken on January 26, no questions were raised. What did we do now? We have just strengthened barricading so that it's not broken again," he said while talking about the strong security measures that have been brought in force.

Protesters, who have been camping for the last two months, have alleged disruption in water and power supply due to the installation of barricades and barbed wire fences. Digging of trenches and nails on roads, and temporary internet suspension are part of "attacks" being organised by the government, the Samyukt Kisan Morcha, an umbrella body of farmer groups, has said.