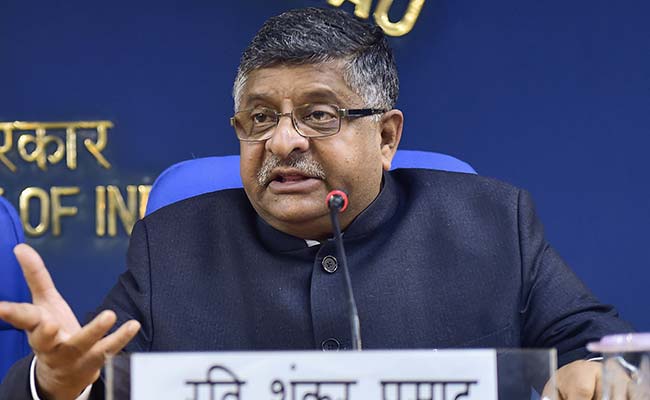 Misconception about the right to the Internet being a fundamental right needs to be cleared, Union Minister Ravi Shankar Prasad said in Rajya Sabha on Thursday, emphasising that the country's security was equally important.

Communications, Information Technology, Electronics and Law and Justice Minister Prasad during the Question Hour said communication of ideas and views through the Internet are part of the fundamental right to speech and expressions.

"The Supreme Court...has clearly stated that no lawyer argued that right to the Internet is a fundamental right...This kind of misconception needs to be corrected. What the Supreme Court has stated is that for communication of your ideas and views the use of the Internet will also be held a part of your fundamental right of speech and expression," Ravi Shankar Prasad said in reply to a query.

"While the right of the Internet is important, the security of the country is equally important... Can we deny (that) Internet...is abused by terrorists...for violence and there have been attempts to create unrest in Kashmir from across the border through the Internet," Ravi Shankar Prasad stressed.

He emphasised that the Constitution which provides rights lays equal stress on its regulation, saying "Use Internet but you cannot create violence...and weaken unity, integrity, and security of the nation."

In reply to a supplementary question by Leader of the Opposition in the Upper House Ghulam Nabi Azad, Ravi Shankar Prasad said that having been a former Chief Minister of Jammu and Kashmir he had also been on the hit list of terrorists and was well aware of abuse of the Internet.

Whether it is a BJP government or a non-BJP government, Internet has been restricted on several times on account of its abuse and "what the Supreme Court has done is they have said the temporary suspension of rules must be periodically reviewed", he said.

He said a committee at the Centre comprising the Home Secretary, the Law Secretary, and the IT Secretary reviews it periodically while there are committees in states too. Ravi Shankar Prasad said law and order is a state subject and decisions are taken based on the ground situation which are reviewed periodically.

"Once the Supreme Court itself has declared that the use of the Internet to propagate one''s views and ideas will be held to be fundamental rights...I will like to flag...this will also be subject to reasonable restrictions...for public order, for security and integrity of India," he said.

On Jammu and Kashmir, he said he had recently visited Kashmir and on-demand of apple growers at Sopore, which produces 300 varieties and sends out 450 trucks daily, had initiated the process of making it an e-mandi.

"People in Kashmir are happy," he said and added voice, SMS and landline services have been restored in Ladakh and Jammu and Kashmir, while Broadband functional in Jammu division.

"We have allowed it for whitelisted websites... there are 783 white-listed websites of government, banking, tourism, e-commerce, transportation, education," he said.