Ridhima Pandey was among 16 children, including Greta Thunberg, who filed a complaint to protest the lack of government action on the climate crisis at the United Nations Climate Action Summit on Monday. 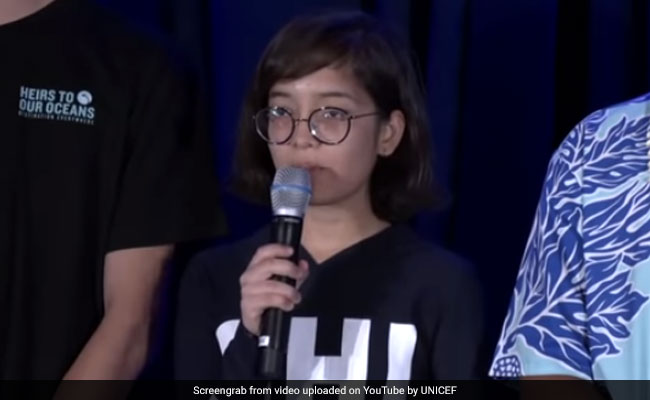 While the world is going gaga over teenage environment activist Greta Thunberg's thought-provoking speech on rising emissions, few are aware that an 11-year-old Indian girl was among 16 child petitioners who filed a complaint to protest lack of government action on the climate crisis.

Haridwar native Ridhima Pandey minces no words when she talks about environment and blames the government for the current scenario.

"Our government is working on paper, less on the ground," Ms Pandey told news agency PTI.

She was among 16 children, including Ms Thunberg, who filed a complaint to protest the lack of government action on the climate crisis at the United Nations Climate Action Summit on Monday.

Ms Pandey, studying in Class 8, hit the headlines in 2017 when she filed a petition in the National Green Tribunal against the government for failing to take action on climate change, highlighting the growing concern over pollution and environmental degradation in the country.

She contended that India is one of the most vulnerable countries and was already experiencing adverse impacts of climate change.

To her dismay, the NGT said climate change was already covered under the environment impact assessment and disposed of her plea.

The tribunal had said the authorities acting under the Environment (Protection) Act, 1986 have to perform their obligation of impact assessment as per statutory scheme which has not been challenged in her plea. The matter is now before the Supreme Court.

Ridhima Pandey spoke at length with news agency PTI about her recent journey to New York, where she attended the United Nations Climate Action Summit. She said what she witnessed there was an unforgettable experience.

"I had a visa appointment in Noida for going to Oslo few months ago. I got to know from somebody that there is an organisation which is looking for young people with regard to climate change. I contacted them and I was interviewed by them in the last week of August. I told them about my petition and other works regarding the environment. Once I cleared the interview, they said that I will have to travel to New York for the summit," Ms Pandey said.

Her father Dinesh Pandey accompanied her to New York. He is all praise for her daughter, who he says is a superstar.

"To see children from all over the world coming together for such an important issue is really heartening. They are aware about the environment and worried about the future. The governments and politicians have no concern for the ecology at all. They are fooling and cheating us. They are hungry for power and nobody is bothered about the future generations," Dinesh said.

On the issue of Ganga cleaning, Ridhima claimed that not much progress is visible on the ground. Vast amount of waste, including polythene bags, garbage and industrial effluent, goes into the river untreated and there is total apathy on the part of the authorities, she added.

"We consider Ganga as our ''Maa'' (mother). Yet we wash our clothes and throw waste in it. The government claims its cleaning but there is hardly any change in the condition of the river. It is still polluted. The government must take proactive measures," Ridhima said.

Talking about Haridwar, a city of religious importance for Hindus, she said there is a lot of air pollution in the city.

Ganga, after flowing 253 kilometres from its source at Gomukh, enters the Gangetic plain for the first time in Haridwar.

Calling for a total ban on plastic, the 11-year-old, who is a class topper, said the prohibition should be strictly implemented. "If we as consumers stop using plastic, companies will stop manufacturing it," she said.