MJ Akbar's resignation came two days after he sued one of the 20 women for defamation, contending that the accusations were meant to malign his "goodwill, reputation and political standing". 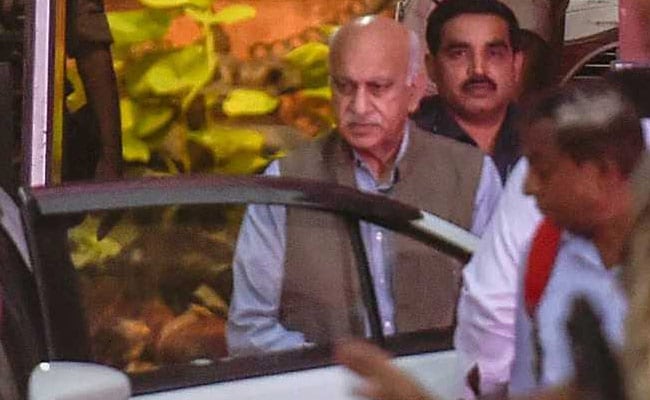 MJ Akbar has said levelling accusations without evidence has become a "viral fever" among some sections.

Union minister MJ Akbar's resignation on Wednesday, following accusations of sexual harassment by around 20 women, was his own decision and will not set a precedent, sources told NDTV. The lawmaker from Rajya Sabha, they said, will continue to be a part of the BJP.

Mr Akbar's resignation came two days after he sued one of the 20 women for defamation, contending that the accusations were meant to malign his "goodwill, reputation and political standing".

Announcing his resignation in a short statement, Mr Akbar said since he was seeking justice in a court in his personal capacity, "I deem it appropriate to step down from office and challenge false accusations levied against me, also in a personal capacity". A Delhi court will take up the case today.

On Sunday, as Mr Akbar returned from an official visit to Nigeria amid demands for his resignation, sources had ruled it out, saying it would "set a bad precedent", since the government had nothing to do with the allegations.

Since then, Prime Minister Narendra Modi's government has been come under harsh criticism from a section in the social media which maintained that it would have been appropriate for Mr Akbar to step down till his name was cleared.

A group of women journalists have written to the Prime Minister and President Ram Nath Kovind, seeking action against Mr Akbar. Pursuing a case in court while continuing as a minister, they pointed out, will be "highly unethical and improper and will cast a cloud over any investigation into his alleged misdeeds".

A couple of PM Modi's ministers - Maneka Gandhi and Ramdas Athawale - have also said the accusations against Mr Akbar should be investigated.

Journalist Priya Ramani was the first woman to call out Mr Akbar after the MeToo movement - triggered by the Harvey Weinstein scandal in the US - gained traction in the country after former actor Tanushree Dutta's allegations of sexual harassment against actor Nana Patekar.

Mr Akbar has trashed the allegations, saying levelling accusations without evidence has become a "viral fever" among some sections.

Ms Ramani said she was ready to fight the defamation complaint and "truth and absolute truth" was her "only defence".

A group of 20 women journalists who had earlier worked with Mr Akbar have supported Ms Ramani. Urging the court to hear their testimonies, they said several of them have suffered sexual harassment from Mr Akbar in his days as an editor and others have been a witness to it.