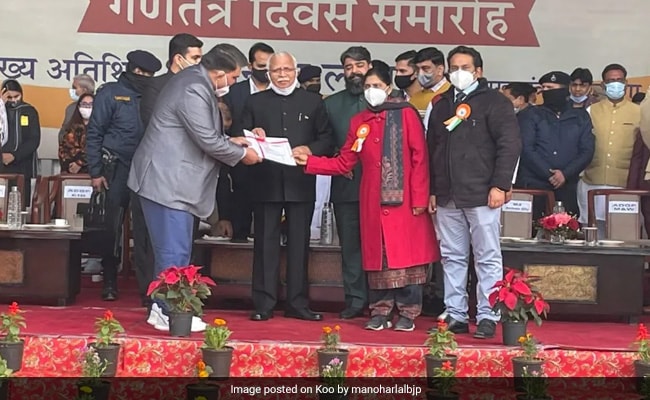 Republic Day 2020: Mr Khattar said full respect is being given to freedom fighters and their dependents.

Haryana Chief Minister Manohar Lal Khattar greeted people on the Republic Day on Wednesday and resolved to eliminate unemployment in the state in next two years.

He also called upon people to adhere to moral values and work unitedly to make the state clean, healthy and happy.

Addressing people during the 73rd Republic Day celebrations at the Police Lines ground in Ambala, he resolved to make Haryana "unemployment-free by providing employment to every youth by 2024".

Mr Khattar first paid homage to martyrs at the War Memorial in Ambala City. After this, he unfurled the national flag at the Police Lines ground and took the salute.

"Today, we are celebrating the 73rd Republic Day. On this occasion, we bow to the known and unknown martyrs who made the supreme sacrifices in the country's freedom movement," he said.

The chief minister said his government is giving full respect to freedom fighters, martyrs and their dependents.

Along with giving a monthly pension of Rs 25,000 to freedom fighters and their widows, a compensation amount given to families of martyred soldiers and para soldiers has been increased from Rs 20 lakh to Rs 50 lakh, he said.

Government jobs to 345 dependents of martyrs have been given, he said.

The Chief Minister said families of brave sons of Haryana, who sacrificed their lives for the country, will be honoured during the "Amrit Mahotsav".

Under this, till August 15, 2023, around 2,000 programmes will be organised with public participation.

Mr Khattar said equitable development of every region is being done with the spirit of "Haryana Ek, Haryanvi Ek".

He said 17 new highways are being built to connect every district with national highways. Besides, a college has been opened in every 20-km radius to promote education. Clusters are being set up at the block level for small and medium scale industries, he said.

To make the youth of the state employable, the policy of 75 per cent reservation for local youth has been implemented in the private sector, he said.

Under the Haryana Enterprise and Employment Policy, the target is to create five lakh new jobs, mobilise investment of more than Rs 1 lakh crore and double the exports, Mr Khattar added.

He said the state has also made big achievements in sports.

"Today, Haryana is the hub of sports and our players are bringing laurels. So far, 12 players have been appointed as deputy directors and 36 have been appointed coaches by creating 550 posts up to the first class in the sports department. To provide world-class training to the youth, five sports centres of excellence are being opened in the state," he said.

The chief minister said all possible efforts are being made to improve the agriculture system and double the income of farmers.

"Today, Haryana is the only state in the country to procure 14 crops at MSP. The state is also giving Rs 362, the highest price per quintal for sugarcane in the country. Compensation is being given for crop damage due to natural calamity and crops are being purchased through Meri Fasal, Mera Byora portal," he said.

He said data of 6,197 gram panchayats has been made available on the Gram Darshan portal under the digitisation initiative.

Meanwhile, Mr Khattar called upon all citizens of the state to get both doses of COVID-19 vaccine to stop virus spread. Besides, citizens who are eligible for the booster dose should also get their vaccination done, he said.

Various cultural performances were given by school and college students in the programme.