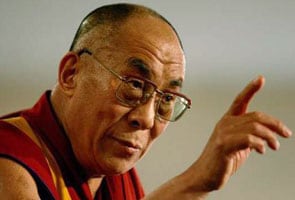 Dharamsala: Tibetan spiritual leader the Dalai Lama on Friday said the issue of reincarnation is his personal right.

"My reincarnation is to be decided by myself, nobody has the right to decide about that," the Nobel Peace laureate said, referring to China's interference with issues of his reincarnation.

"The institution of the Dalai Lama is being followed for centuries. This is my personal right (to follow it or not)," the 14th Dalai Lama added.

He was speaking on the second day of a three-day Buddhist conference here.

A new Chinese law says the government has to approve all reincarnations of living Buddhas or senior religious figures in Tibetan Buddhism.

The government-in-exile based here believes the Chinese are trying to finish two major Tibetan religious institutions - the Dalai Lama and Panchen Lama.

Heads and representatives of four major traditions and sub-traditions of Tibetan Buddhism and ancient Bon tradition are taking part in the conference being organised by the Central Tibetan Administration.

An official said the Dalai Lama's office had distributed a draft on the issue of reincarnation among the participants for discussion.

"Today communist China considers religion a poison and they consider me a demon. So, I would be a demon reincarnation. This is nonsense," the Dalai Lama was quoted as saying in Toulouse in France in August. "So the Chinese communists should accept rebirth."

The Buddhists, both in exile and in Tibet, believe once the Dalai Lama dies, China will appoint its own successor. At that time, there might be two Dalai Lamas -- one recognised by China and the other chosen by the exiles -- like in the case of the Chinese-appointed Panchen Lama.

Born July 6, 1935, at Taktser hamlet in northeastern Tibet, the Dalai Lama was recognised at the age of two as the reincarnation of the 13th Dalai Lama Thubten Gyatso.

Promoted
Listen to the latest songs, only on JioSaavn.com
He fled Tibet after a failed uprising against the Chinese rule in 1959, basing his Tibetan government-in-exile here that never won recognition from any country.

Reincarnation is my personal rightDalai Lama