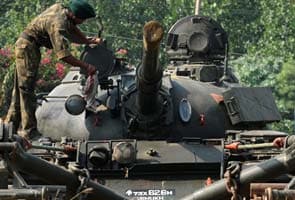 New Delhi: The Indian Infantry - that hard working, non-complaining arm of the Army - is at last likely to get the attention it deserves, if plans envisaged by Army Chief General Bikram Singh and the Directorate of Infantry fructify in the next couple of years.

Starting 2014, several basic weapons used by the 350-odd infantry battalions are likely to be replaced by a new and more lethal ones. So the assault rifle, the carbine, the light machine gun (LMG), the sniper rifle and even the anti-tank guided missile (ATGM) - essentials in an infantry battalion - all are set to be replaced over the next five years. Many of these weapons, currently used by the troops are of 1960s vintage. The Dragunov sniper rifle, for instance. Or the ATGMs which are on second generation variety.

To begin with, the current mix of 7.62 self-loading rifle and the 5.56 INSAS rifle used by some battalions is likely to be replaced by a new double barrel rifle complete with a conversion kit which will enable the troops to make dual use.

"When an infantry battalion is deployed in counter-insurgency, counter-terrorism (CI-CT) role , it will have the option to use the 7.62 mm barrel but when it gets posted to a peace station, the 7.62 mm barrel can be mothballed in field stores and the same rifle can then be converted to 5.56 mm bore."

Each infantry battalion in the Indian Army normally holds about 494 pieces of the basic rifles. In the first phase, 120-odd battalions deployed in CI-CT role under Northern and Eastern Command will get these rifles by mid-2014. In phase II, transfer of technology will be ensured and the production will then be taken up by India's Ordnance Factory Board (OFB).

Well-known gun brands like Colt and Beretta are among five or six companies competing for the big tender of 60,000 assault rifles estimated to cost Rs 5,000 crore at current prices. According to Army Headquarters, field trials are currently on and are expected to go on till mid-2013 before a winner emerges.

The current version of the LMGs - 45 in each battalion - are of 5.56 mm bore and are bulky at 6.23 kg. The Army plans to replace them with much lighter and more lethal ones with longer range and 7.62x51 mm bore. The general staff qualitative requirements (GSQR) for the new LMGs are being worked out currently, according to informed sources in the Army HQ.

Procurement of third generation ATGMs worth about Rs 2,000 crore is being given priority since the current lot of eight launchers to each battalion is of much older vintage. The Army wants to graduate from the Milan ATGMs (which has a semi-automatic command line of sight) to a third generation ATGM which will be an 'automatic command line of sight' ability. In other words, it will have the "fire and forget" mechanism. Trials are currently on for this version of ATGMs in the western sector where they would be initially deployed given that tank warfare will dominate any conflict in this area.

The other big procurement on the anvil is the induction of the new generation carbine. India has plans to procure over 43,000 carbines at a cost of over Rs 3,200 crore. Each infantry battalion currently holds an inventory of about 230 carbines. While trials are on, the first induction of the newer generation of carbines is likely to take place in 2014.

Promoted
Listen to the latest songs, only on JioSaavn.com
Sources in the Army HQ say Army Chief General Bikram Singh, an infantry officer himself, is keen that the foot soldiers in the forefront of CI-CT and conventional operations, get the best of weaponry to match their undoubted courage and commitment.