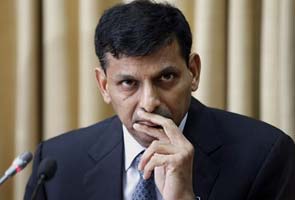 Already credited with causing a bounce in India's battered financial markets, Raghuram Rajan, the new Governor of the Reserve Bank of India, was told today that he had become a "sex symbol" after just a week in the job.

Rajan, a 50-year-old from southern India, has been depicted in the local media as James Bond and called a "rock-star" economist, but a column by a top-selling novellist on Friday took the exaltation to new heights.

"That his chiselled features are as sharp as his brain add to his current status as the Poster Boy of Banking," wrote political author Shobhaa De in a column in The Economic Times newspaper. (Read full article here)

After calling him "hot", comparing him to Bollywood heart-throb Ranbir Kapoor and saying she would "salivate from the sidelines", De, who is a regular columnist in India's newspapers, said the country should welcome a departure from the stereotype of central bankers.

"Funny how quick Rajan has been slotted as a much panted-after sex symbol," she wrote, adding: "It's not often one gets an RBI Guv who makes hearts go 'dhak dhak' each time he strides into a room."

Rajan, a former finance professor, who hails from the southern state of Tamil Nadu, has long been a darling of the Indian media, leading one newspaper to describe him as an "economist with rock star appeal."

He first won fame when, as IMF chief economist, he published a paper that said sub-prime lending could lead to disaster, and predicted the 2008 global financial crisis three years before it struck.

Promoted
Listen to the latest songs, only on JioSaavn.com
Rajan took office nine days ago, warning that he might have to take unpopular measures amid an economic crisis that had seen the Indian currency hit record lows of nearly 70 rupees to the dollar.

The shares on the Bombay Stock Exchange have since recovered sharply, as has the currency, which was trading at around 64 rupees to the dollar today.