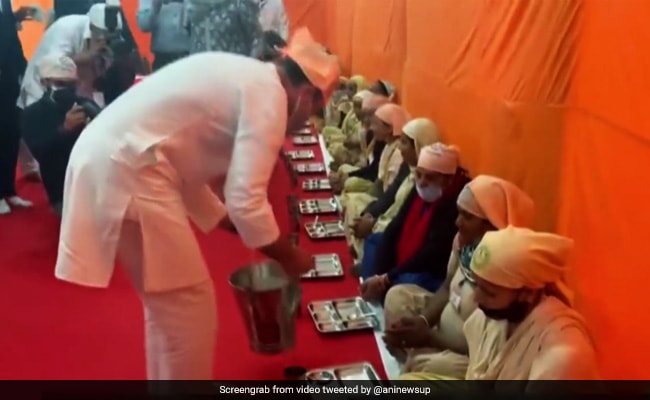 Rahul Gandhi served langar at the Ravidas Temple in Varanasi.

Congress leaders Rahul Gandhi and Priyanka Vadra served Langar today at a temple in Varanasi on the occassion of the birth anniversary Ravidas Jayanti.

Both Rahul Gandhi and Priyanka performed 'langar seva' during their visit to the birthplace of the revered poet and social reformer of the 15-16th century at Seer Govardhan. The Gandhi siblings arrived at the airport in Babatpur where they were received by local Congress leaders, including former MLA Ajay Rai, and went straight to the temple of Guru Ravidas in the city.

The temple management offered a framed picture of Guru Ravidas to the former Congress president, and Ms Gandhi, the party's general secretary and it's UP in-charge.

Sant Ravidas was regarded as a Dalit icon as he advocated for equality and dignity for all, irrespective of their caste. He also promoted gender parity and opposed the division of society based on gender or caste.

Earlier today, Prime Minister Narendra Modi offered prayers at Guru Ravidas Vishram Dham Mandir in Delhi's Karol Bagh. He also interacted with the devotees and participated in the 'Shabad Kirtan' in the temple. PM Modi said that his government has imbibed the spirit of Guru Ravidas in every step and scheme.

The Election Commission of India (ECI) had postponed Punjab Assembly elections in view of Guru Ravidas birth anniversary. The polls, which were slated to be held on February 14, have been shifted to February 20.