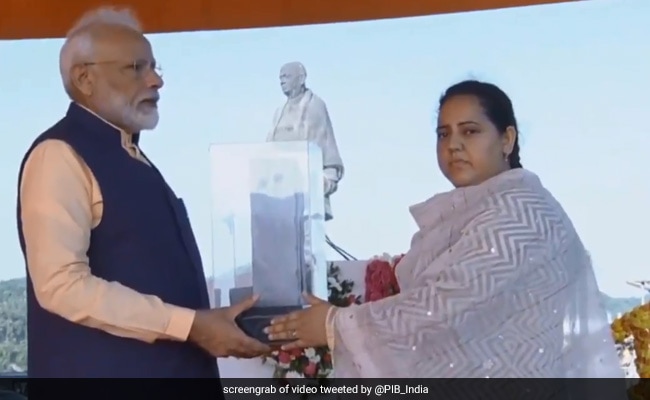 Prime Minister Narendra Modi, in Gujarat today to mark National Unity Day, has been presented with a memento honouring the contribution and sacrifice of the police fraternity of India. The memento - a replica of the National Police Memorial that commemorates the more than 34,000 state and central policemen and women who died in the line of duty - was handed over by the wife of Naseer Ahmad, one of the 42 CRPF soldiers who were killed in February's terror attack in Jammu and Kashmir's Pulwama district.

PM Modi's government has celebrated Sardar Vallabhai Patel's birth anniversary as National Unity Day every year since it came to power in 2014.

In a video shared online by the Press Information Bureau (PIB), the Prime Minister, can be seen standing on a platform with the Statue of Unity - a 182-metre-high statue of Sardar Patel - in the background.

"On 14 February 2019, 42 brave @crpfindia jawans were martyred in a terrorist attack in #Pulwama. Wife of martyred CRPF Hawaldar Naseer Ahmad, presents PM @narendramodi with a memento of National Police Memorial on behalf of all Police fraternity of #India," the tweet read.

On 14 February 2019, 42 brave @crpfindia jawans were martyred in a terrorist attack in #Pulwama.

Wife of martyred CRPF Hawaldar Naseer Ahmad, presents PM @narendramodi with a memento of National Police Memorial on behalf of all Police fraternity of #Indiapic.twitter.com/ylBAmgUIH0

On Sardar Patel's 144th birth anniversary, the centre has also split the former state of Jammu and Kashmir into two Union Territories - Jammu and Kashmir and Ladakh. The move comes nearly three months after the government scrapped the decades-old special status under Article 370.

As India's first Home Minister, Sardar Patel is credited for the merger of over 560 princely states into the Union of India.

PM Modi also participated in an "Ekta Diwas" or National Unity Day Parade. He is also expected to visit a technology demonstration site later today and interact with civil service probationers at Kevadiya in Narmada district, a statement from the Prime Minister's Office said.