The Defence Ministers of all eight SCO member nations are expected to deliberate on regional security challenges like terrorism and extremism and ways to deal with them "collectively" in Moscow on Friday, officials said. 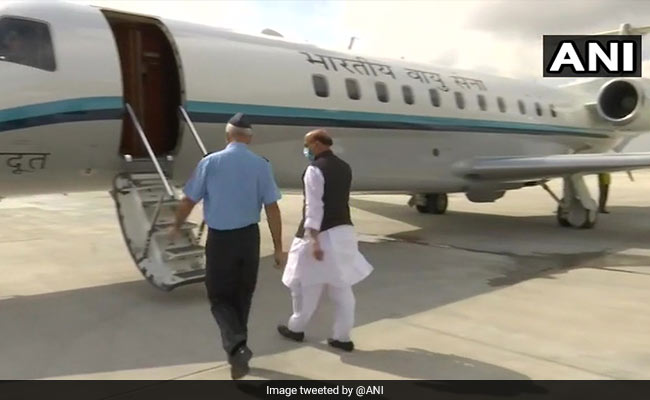 The Defence Ministers of all eight SCO member nations are expected to deliberate on regional security challenges like terrorism and extremism and ways to deal with them "collectively" in Moscow on Friday, officials said.

The meeting is taking place under the shadow of a fierce standoff between India and China, both members of the influential bloc.

Asked about the possibility of a bilateral meeting between Rajnath Singh and Gen Wei on the sidelines of the SCO event, officials said there is no such plan.

"Heading to Moscow. During this visit, I shall be attending the combined meeting of Defence Ministers of Shanghai Cooperation Organisation (SCO), Collective Security Treaty Organisation (CSTO) & CIS members in commemoration of the 75th Anniversary of victory in the World War II," Mr Singh tweeted.

I shall also be meeting Russia's Defence Minister, General Shoigu to discuss bilateral cooperation and issues of mutual interest. India and Russia are privileged Strategic Partners. Looking forward to further this partnership during my visit.

He said issues of mutual interest will figure in his talks with Mr Shoigu.

"India and Russia are privileged Strategic Partners. Looking forward to further this partnership during my visit," Rajnath Singh said.

In his meeting with Mr Shoigu, Rajnath Singh will press for expediting supply of a number of weapons systems, ammunition and spares to India by Russia under contracts which were concluded earlier, officials said.

In the talks, both sides are expected to officially finalise a long-pending proposal to produce AK 203 rifles in India.

Officials said Mr Singh is also likely to request the Russian side to ensure timely delivery of the S-400 missile defence systems to India.

The delivery of the first batch of S-400 surface-to-air missile systems to India is scheduled by the end of 2021.

In October 2018, India had signed a USD 5 billion deal with Russia to buy five units of the S-400 air defence missile systems, notwithstanding a warning from the Trump administration that going ahead with the contract may invite US sanctions.

Rajnath Singh will depart for India from Moscow on the evening of September 5, they said.

The SCO defence ministers' meeting is taking place in the wake of fresh tension between India and China following the Chinese army's unsuccessful attempts to change the status quo on the southern bank of Pangong lake in eastern Ladakh.

The two sides held several rounds of diplomatic and military talks to end the border standoff which began on May 5. The fresh attempts by China to change the status quo in the Pangong lake area escalated the tension further.

On Saturday, India announced withdrawal from a multilateral war game in Russia this month after it emerged that Chinese and Pakistani troops will also be part of it. However, officially it was announced that India is not joining it due to the COVID-19 pandemic, reported news agency Press Trust of India.

It is Rajnath Singh's second visit to Moscow since June. He had represented India at the Victory Day Parade in Moscow on June 24 that commemorated the 75th anniversary of the Soviet victory over Nazi Germany in the Second World War.

The SCO, seen as a counterweight to NATO, has emerged as one of the largest transregional international organisations which accounts for almost 44 per cent of the world population stretching from the Arctic Ocean to the Indian Ocean and from the Pacific Ocean to the Baltic Sea.

The aim of the SCO is to maintain peace, stability and security of the region. India became a member of SCO in 2017.