Officials had said the recent developments in Afghanistan and the situation in the Indo-Pacific region will figure in the talks. The areas of defence and security, civil nuclear cooperation and trade and investment constitute the principal pillars of the Indo-French strategic partnership. 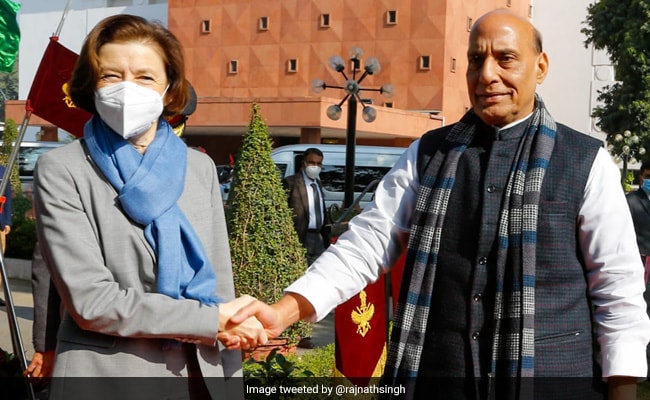 Ms Parly arrived in New Delhi on Thursday evening on a two-day visit.

Officials earlier said the recent developments in Afghanistan and the situation in the Indo-Pacific region will figure in the talks. The areas of defence and security, civil nuclear cooperation and trade and investment constitute the principal pillars of the Indo-French strategic partnership.

In addition, India and France are increasingly engaged in new areas of cooperation such as in the Indian Ocean region, climate change and sustainable growth and development.

The two countries share a close degree of convergence on a range of regional and global issues as well including ways to deal with terrorism and extremism.

"Raksha Mantri Shri @rajnathsingh receives the visiting Defence Minister of France, Ms @florence_parly at Vigyan Bhawan. The 3rd India-France Annual Defence Dialogue will be start in a short while from now," Mr Singh's office tweeted before the talks began.

Ahead of the meeting with Mr Singh, Ms Parly said at a think-tank that she is in India to say how "precious" the friendship between France and India.

She described India as a unique land of vibrant colours, impressive landscapes and a millennium of rich history, saying the country is unlike any other.

Ms Parly said both India and France promote multilateralism and a rules-based international order, noting that it is good to refer to "rock-solid principles" when the world and the region experienced upheavals.

In this context, Ms Parly talked about the convergence of views by the two sides in dealing with major issues and global challenges including the fight against climate change.

"I believe that armed forces have a lot to contribute to the fight against climate change: this is the meaning of an initiative we took at the Paris Peace Forum in November," she said.

"I think we have a lot to learn from India, which is very determined to meeting the commitments of the Paris Agreement and is actively working on it," she added.

It is the first high-level visit from France to India after Australia, the UK and the US (AUKUS) announced a security partnership in September.

The AUKUS security will facilitate Australia getting technology to build nuclear-powered submarines.

France reacted angrily to the formation of the new alliance as it resulted in Paris effectively losing a multi-billion dollar deal to build 12 conventional submarines for Australia. France is also upset over its exclusion from the alliance.

Asked about AUKUS, she said it was a disappointing development for France.

"We have developed a very good relationship with Australia. Then Australia made its own decision. I will not comment on it. It is of course very disappointing for us," she said.