Defence Minister Rajnath Singh said that he will write to family members of each personnel, who are working on INS Vikramaditya, talking about their valour. 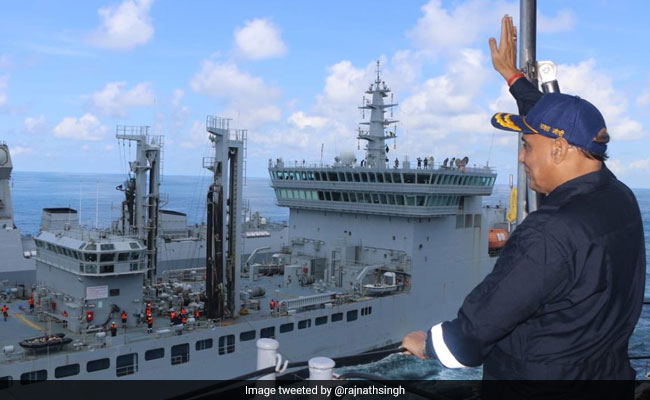 On board INS Vikramaditya:

"I am aware that after the Pulwama attack, when the country responded effectively through strikes on terror camps in Balakot, the Western Fleet was immediately deployed in a strong posture in the northern Arabian Sea," the minister said aboard aircraft carrier INS Vikramaditya.

"This degraded the ability of our adversary to deploy and ensured they did not attempt any misadventure at sea. In this context, the role of Indian Navy to have a credible ''second strike'' capability as a nuclear deterrent, is most significant."

The Defence Minister's remarks come just days after Pakistan Prime Minister Imran Khan, in his maiden speech at the UN General Assembly, drummed up hysteria over nuclear war while targeting India over Kashmir.

India had hit back saying the "threat of unleashing nuclear devastation qualifies as brinksmanship, not statesmanship".

The combat potential, vigour and professionalism demonstrated by the @indiannavy during my visit to INS Vikramaditya has made me proud of the sustained & relentless hard work put in their personnel. I would like to congratulate each and every officer and sailor of the Indian Navy pic.twitter.com/F7dmf9Zh33

Tensions between the two countries have spiked since the abrogation of Article 370 with Pakistani leaders repeatedly raising the nuclear bogey. But India has maintained that it is an internal issue and Islamabad should end all support to terrorist outfits.

Mr Singh said Indian Navy's role is critical in ensuring the energy security and economic growth of the country and noted that about 90 per cent of India's international trade by volume and about 70 per cent by value is carried by sea.

"As we move towards our goal of five trillion dollar economy, the volume of maritime trade will only grow in times to come. Thus, I firmly believe that the role of the Indian Navy in general and the Western Fleet in particular is also critical in ensuring the energy security and economic growth of the country," he added.

The minister said that he will write to family members of each personnel, who are working on INS Vikramaditya, talking about their valour.

Spent 24 hours at INS Vikramaditya. This Aircraft Carrier is the ‘Sikandar of Samundar'.

Visiting ‘Vikramaditya' was one of the most memorable experiences of my life. A Day at Sea has given me a new perspective about the capabilities and power of the @indiannavy.' pic.twitter.com/n4Y4ffwNqY

INS Vikramaditya is currently travelling in Arabian sea, near Goa.

"I was telling Admiral Karambir Singh (Chief of Naval Staff) that since I have met so many personnel here...I would write a letter to either parents and spouse of each personnel, telling them that I met your son or husband at INS Vikramaditya."

"I will tell them (parents) that your son is full of valour and you have given birth to such a child that the whole country is proud of you and your son. I will go and write to each member of your family," the minister added.

During his overnight stay on the INS Vikramaditya, Mr Singh witnessed various military exercises involving submarines, frigates and the carrier.

The minister said that the government would like that Indian Navy to be known across the world as "blue water navy".

A blue water navy is capable in operating globally, even in deep ocean waters far away from any coastline.

About his overnight stay on the aircraft carrier, the minister said, "I have been with you since last night. And I have got the opportunity for the first time to stay at INS Vikramaditya. I can say that if there is any "Samundar Ka Sikandar (king of the seas)", it is INS Vikramaditya only."

"Keeping in mind our strategic interest and maritime security, Indian government also believes that the country needs three aircraft carriers. Currently, the work on second one is going on. I think it will be over soon," the minister said.

The minister's address at INS Vikramaditya was relayed through radio to Navy personnel of 21 ships, which were surrounding the aircraft carrier in Arabian Sea.