In A First, Coast Guard Ship Commissioned Via Video Call Amid Lockdown 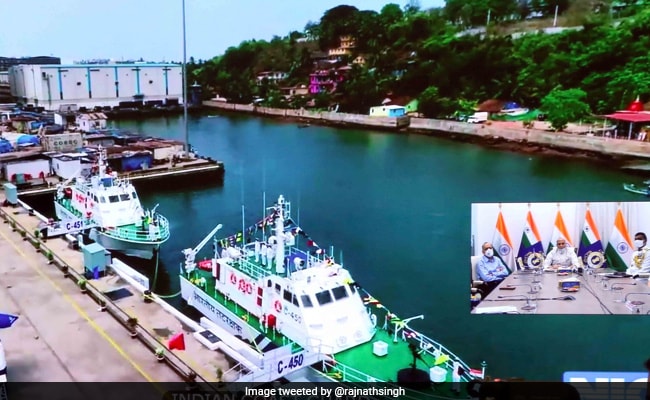 Defence Minister Rajnath Singh on Friday commissioned a ship and two interceptor boats of the Indian Coast Guard (ICG) in Goa through video conferencing from New Delhi in the backdrop of COVID-19, a step that will boost operational capability of the maritime security agency.

Speaking on the occasion, Mr Singh said the commissioning of the ships is an important milestone in capacity building of the Indian Coast Guard.

He lauded the efforts put in by the ICG towards the safety and security of the Indian coast.

Safe coasts provide opportunities for economic growth of the country which is essential in nation-building, the defence minister said.

An ICG spokesman said the ship ''Sachet'', the first in the series of five offshore patrol vessels (OPVs), has been designed and built indigenously by Goa Shipyard Ltd (GSL) and is fitted with state-of-the-art navigation and communication equipment, sensor and machinery.

The spokesman said this was the first time in the Indian maritime history that a Coast Guard ship was commissioned through digital medium, maintaining the strict protocol of social distancing in the backdrop of the COVID -19 pandemic.

Along with Singh, Ajay Kumar, defence secretary, and D G Krishnaswamy Natarajan, Director General of ICG, were also present on the occasion.

Minister of State for Defence Shripad Naik was present at Vasco facility of Goa Shipyard Ltd at the time of the commissioning.

"The 105 metre ship displaces approx 2350 tons and is propelled by two 9100 KW diesel engines designed to attain a maximum speed of 26 knots, with an endurance of 6000 nm.

"The sustenance and reach, coupled with the latest equipment and system, provides her the capability to perform the role of a command platform and undertake tasks to fulfil the Coast Guard charter," the spokesman said.

The ship is designed to carry a twin-engine helicopter and four high speed boats and one inflatable boat for swift boarding and search and rescue operations, the spokesman added.

ICGS Sachet is commanded by Deputy Inspector General Rajesh Mittal and manned by 11 officers and 110 men.

The spokesman said the interceptor boats C-450 and C-451 are indigenously designed and built by L&T Shipyard, Hazira (Gujarat) and is fitted with latest navigation and

Communication equipment. The two 30 metre boats are capable of achieving speeds in excess of 45 knots and are designed for high speed interception, close coast patrol and low intensity maritime operations, the spokesman said.

The spokesman said the ICG has been a pioneer in inducting indigenous assets which has enabled it to remain operationally available throughout the year.

In continuation of our efforts to maximise the indigenous content in our new assets, the ICG is proud to state that the ships commissioned today, have about 70 per cent indigenous content, thus providing the necessary fillip to the Indian shipbuilding industry, he said.

He said the ship and boats, on joining the ICG fleet, will be deployed extensively for EEZ (exclusive economic zone) surveillance, coastal security and other duties.

"With today's commissioning, the Indian Coast Guard has reached a landmark of 150 ships and boats and 62 aircraft. Further, 40 ships are at various stages of construction at different Indian shipyards," the spokesman said.

Also, 16 Advanced Light Helicopters are under production at HAL, Bengaluru, which will provide the added strength to the surveillance capabilities of the ICG to deal with the ever-dynamic maritime challenges, he said.