Rajasthan cabinet, crafted in consultation with Rahul Gandhi, is seen to balance old and new guard

The lone lawmaker of an ally, a former royal and many first-time ministers were sworn into the new Rajasthan government as the ruling Congress plans ahead for the 2019 national election battle.

Twenty-three ministers took oath in Jaipur, one week after Chief Minister Ashok Gehlot and his deputy Sachin Pilot took charge following the Congress' return to power in the desert state.

The Congress, which won 99 seats, reached the majority-mark along with a single lawmaker of Ajit Singh's Rashtriya Lok Dal, Subhash Garg; he has been given cabinet rank as the Congress tries to keep allies on board.

The cabinet, crafted in consultation with Congress president Rahul Gandhi, is seen to balance the old and new guard in the Congress. Some former ministers have been included. No first time lawmaker is in the government.

There is one woman, Mamta Bhupesh, who was sworn in as Minister of State.

The former royal from Bharatpur, Maharaja Vishwendra Singh, has also been included in the cabinet. 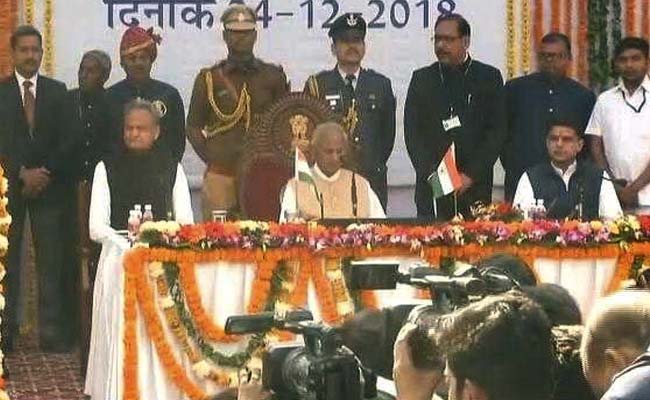 The Rajasthan cabinet is seen to balance the old and new guard in the Congress.

Senior ministers from the former Ashok Gehlot cabinet, like CP Joshi, Bharat Singh and former speaker Dipendra Singh, have been kept out of the cabinet, a move which has raised eyebrows.

Rajasthan can have a total of 30 ministers, including the chief minister. Some vacancies will be filled later, say leaders.

The Congress won the BJP-ruled states of Rajasthan, Madhya Pradesh and Chhattisgarh in recent elections but by a wafer-thin majority in the two bigger states.

With an eye on the national election due by May, the party has kept allies and caste-equations in mind.

The Congress began its term in the states by announcing a big populist step - loan waivers for farmers.

Case Against 13 After Family Tries To "Get Rid" Of Baby Girl Born To Rape Survivor: Report