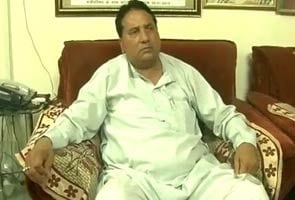 Jaipur: Babu Lal Nagar, a minister in the Gehlot government in Rajasthan, has been accused of rape by a 27-year-old woman.

The Jaipur-based woman says Mr Nagar, the Minister for Dairy and Rural Industries, called her to his house on September 11, confined her to a room, beat her up, and then raped her.

Fearing the police would not register her complaint, the woman directly approached the court, which then directed the police to register a FIR against the minister. Mr Nagar has been booked under sections 376 (rape) and 323 (causing hurt) of the Indian Penal Code.

The case will now be investigated by the Crime Branch of the Crime Investigation Department (CB-CID).

"As a minister and sitting MLA is charged, the case will be investigated by the CB-CID, we have registered the FIR," said Bhawani Singh, Station House Officer, Sodala Police Station.

Mr Nagar has called the case a political conspiracy, but he admits having met the woman during a public meeting.

He, however, says the charges are concocted and claims the victim had filed similar charges in 2012 against a man from whom she then extorted money.

Promoted
Listen to the latest songs, only on JioSaavn.com
"People had complained about this woman to me that she extorts money. I scolded her when she came to meet me during a public hearing," Mr Nagar said.

This case brings further embarrassment to the Gehlot government, as two of its former ministers are already in jail, found guilty of the murder of auxiliary nurse and midwife Bhanwari Devi in 2011. Now, this new scandal, just before the elections, will surely be a setback for the Congress in Rajasthan.
Comments
Gehlot governmentBabu Lal NagarRajasthan Minister for Dairy