This is not the first time PM Narendra Modi displayed his drumming skills. He played a traditional red dholak at a rally in Chhattisgarh last month. 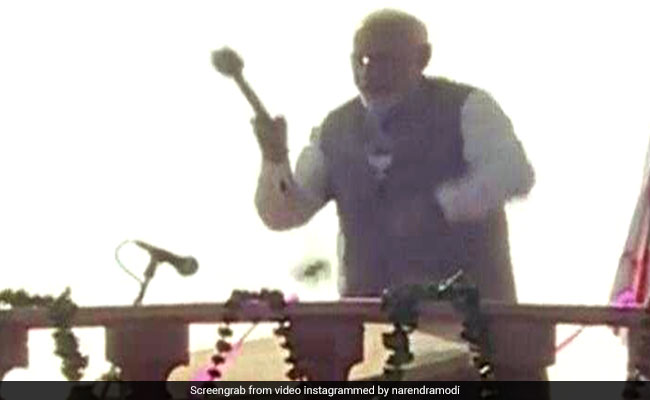 Prime Minister Narendra Modi wrapped up his election campaign in Rajasthan on a high note on Wednesday, putting his drumming skills on full display.

At a rally in Dausa on the last day of campaigning, PM Modi greeted the crowd by playing a jumbo traditional drum or dholak. "The is the sound of victory in Rajasthan... this is the sound 2018 and 2019," a man could be heard on speaker as PM Modi, accompanied by a local leader, plays the drum.

The video of the brief drumming session was posted by PM Modi on his Facebook and Instagram pages.

"The sound of victory... of development and people power," he wrote in the Facebook post which received over 32,000 'likes'.

"Tried my hands at the drums in Rajasthan. Have a look," he wrote on Instagram.

At the rally, PM Modi continued his attack on the Congress, saying it is a confused party with confused leadership. "They don't know the difference between Kumbharam and Kumbhkaran," he said, referring to Rahul Gandhi's blooper on Tuesday when he mistakenly referred to a scheme as "Kumbhakaran Lift Yojana" instead of "Kumbha Ram Lift Yojana".

PM Modi's penchant for the percussion instrument was evident at various public events in the past.

Last month, PM Modi beat a traditional red dholak before addressing a rally in Chhattisgarh. As he took to the stage, a local leader threw the dholak's strap around his neck and persuaded him to proceed. A smiling PM Modi then briefly played the dholak as people around him clapped above their heads. Then he took his seat.

PM Modi's skills as a drummer was displayed for the first time four years ago, during his visit to Japan in September 2014 when he joined Japanese percussionists to perform a 'jugalbandi'.

In July 2016, PM Modi enjoyed drumming with Tanzanian president John Pombe Joseph Magufuli during his visit to the country.