Families gave up the bodies of their loved ones to the river or buried them in shallow graves on its banks, unable to afford the cost of funeral pyres at the height of the outbreak in April and May. 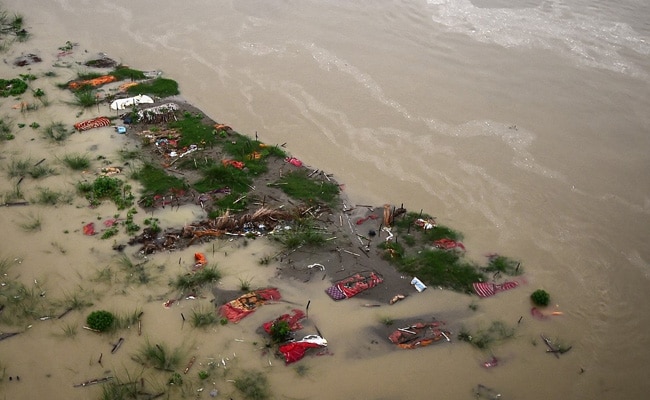 Officials estimate that up to 600 bodies were buried along the Ganges in the city during the virus surge.

Partly hidden between long reeds of grass, bodies shrouded in cloth float silently down the holy Ganges river, a reminder of how ferocious coronavirus wave overwhelmed hospitals and crematoriums.

Families gave up the bodies of their loved ones to the river or buried them in shallow graves on its banks, unable to afford the cost of funeral pyres at the height of the outbreak in April and May.

But the start of seasonal monsoon flooding has caused strong currents to surge through the 2,500-kilometre (1,550-mile) long waterway, dislodging some of the bodies buried on its banks.

Officials in Allahabad -- where millions visit to perform funeral rites -- say almost 150 bodies that floated up in the past three weeks have been cremated.

Funeral pyres line riverside embankments beside piles of wood waiting for new bodies to be retrieved.

When AFP visited the surrounding areas, there were dozens of partially submerged corpses in the river.

Officials estimate that up to 600 bodies were buried along the Ganges in the city during the virus surge.

But locals believe that is a fraction of the real number and fear that more could be dislodged from the sandy banks by rapid waters in the coming weeks.

Sonu Chandel, a boatman who works with a riverside crematorium, was shaken by the sight of families burying their dead two months ago.

He said a sense of uneasiness returned to him as the waters rose to cover the banks.

"It was really sad to see poor people burying their loved ones in an undignified manner, but the rising water level has made it worse," Chandel told AFP.

"There is always the fear of (a body) hitting the oar or (my boat) running over a dead body as the water level goes up."

'The flow is very fast'

Other major religious centres, such as the religious hub of Varanasi further downstream, have experienced similar problems.

Locals fear the corpses, if not removed, risk further contaminating what is already one of the world's most polluted waterways.

"This... could cause dangerous diseases," Dipin Kumar, who lives near the Ganges in Allahabad, told AFP.

"The government must think this over and only they can make a plan."

Pilgrims flock to the Ganges to ritualistically bathe, and even before the pandemic, millions cremated their dead along its banks before scattering the ashes in the river.

Some who could not afford wood or other materials for funeral rites would submerge the bodies of their loved ones instead, while others conducted water burials as part of their religious traditions.

The number of corpses in and around the Ganges sharply increased during the record-breaking coronavirus surge.

Locals said funerals -- which can cost more than 7,000 rupees ($100) -- were adding to the hardships of those already struggling to make ends meet in the pandemic-stricken economy.

Officials have stationed two boats along the banks to retrieve the corpses -- sometimes with help from local fishermen -- but have had little success in recent days.

"The flow is very fast and it is a challenge to fish out bodies now," a police officer told AFP.