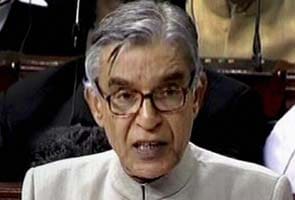 New Delhi: An eye on general elections next year, Pawan Kumar Bansal's Rail Budget today did not raise passenger fares, but he introduced a nearly six per cent hike in freight traffic rates and additional charges on ticketing services and some passenger tickets, mostly for wealthier passengers.

The BJP and the Left have slammed it as a "populist election budget" that has "hidden costs"; Mayawati, whose support holds up the Manmohan Singh government, said she was dismayed that, "Fare has been hiked through the back door."

Inspite of the criticism, Mr Bansal said, "I have done my job. I am satisfied... I have taken care of all states."

The increase in supplementary charges for superfast trains, like Rajdhanis and Shatabdis, and charges on reservations and cancellations will mean a fare increase of between Rs. 5 and Rs. 25 for all classes in superfast trains.

The hike in freight tariff and the hike in supplementary charges are expected to generate additional revenue of Rs. 4,683 crore for the Railways in the next fiscal year. The Railway Minster, presenting his maiden Railway Budget and the first by a Congressman in 17 years, emphasised that the Railways is staring at losses of Rs. 24,000 crore this year.

In a speech made lively by poetry and verse, the minister put forth flat statistics to say that unless the Railways cuts losses and begins to make money, it cannot provide best value to customers and play its part in the nation's growth effectively. "Indian Railways must remain financially sustainable. The number of passenger trains has increased from 8,000 in 2001 to over 12,000 in 2012, yet losses continue to mount," Mr Bansal said, adding that scarcity of resources and a thin spread of funds continued to be a problem.

Mr Bansal said he had to raise Rs. 95,000 crore in the next four years of the 12th Five-Year Plan, which called for setting higher targets for expanding the rail network.

Passenger fares were raised by 21 per cent last month, but a significant part of the expected additional revenue of about Rs. 6,000 crore was wiped out by the increase in the price of diesel. Mr Bansal said the fuel surcharge he was imposing on freight was aimed at meeting the increased fuel bill. The Railways would absorb the Rs 850-crore loss from no passenger fare hike, he said. He also announced 67 new Express trains and 27 new passenger trains.

Global brokerage Nomura has said that while linking freight to fuel costs is the right move, subsidized passenger fares account for the bulk of rail losses and until that is addressed, the financial position of the Railways is unlikely to turn around quickly.

The Rail Budget is closely watched, both by the millions of Indians who use it every day and see cheap rail travel as a right, and by economists looking to see how far the government will be willing to go to tackle politically sensitive reforms.

India Inc's reactions ranged from positive to disappointment. "We expected the Budget to be more constructive, but I think the minister was under restrictions... there is no major impetus to growth," Ashok Vijay, chief financial officer at Texmaco, the largest wagon maker in the country, said.

However, industry body Federation of Indian Chambers of Commerce and Industry said it welcomed the Railway Ministry's thrust on safety and fiscal discipline. As part of new safety measures, Mr Bansal today announced that new coaches with anti-climb features will be brought in, over 10,000 level crossings will be eliminated and that 17 bridges have been sanctioned for rehabilitation.

Promoted
Listen to the latest songs, only on JioSaavn.com
To generate additional revenue, Mr Bansal has proposed public private partnerships in building the exclusive railway freight corridors across the country to decongest passenger traffic and improve its transportation services which have been steadily losing ground to roads.

For the stock markets, the Budget was pretty much a non-event. The BSE Sensex slipped below the key 19,000 mark, while the broader Nifty traded below 5,750 amid a huge selloff, but traders attributed the selloff to widespread profit-taking in blue chips ahead of the Union Budget 2013-14 and weak global cues.