"Held Branch As Bus Went Down": Lone Survivor Of Crash That Killed 33 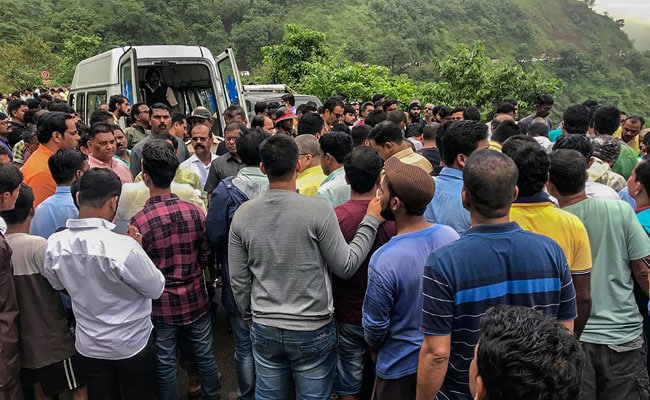 When Prakash Sawant-Desai boarded a bus this morning along with his university colleagues, nobody would have expected he would be the only person alive a few hours later. The private bus, on its way to Mahabaleshwar from Maharashtra's Ratnagiri district for a weekend picnic, skidded off the Mumbai-Goa highway, and plunged 500 feet into a ravine this morning. 33 of the 34 people inside the bus died.

Prakash Sawant-Desai miraculously survived with only minor injuries. He says he held onto tree branches as the bus was falling in the ravine near Poladpur, about 175 kilometres from Mumbai.

"It felt like the bus had slipped on mud and then it went down. I was dragged but I held on to whatever I could. I hung to branches while the bus went down," Mr Sawant-Desai, who is an Assistant Director at the Dr Balasaheb Sawant Konkan Krishi Vidyapeeth in Ratnagiri, told reporters.

He somehow managed to climb to safety and alerted the university and police authorities of the accident around 10:30 am. He says he had to climb over 500 feet, as there was no mobile phone range in the valley below in the treacherous Ambenali Ghat section.

"On reaching the road at the top, I came into the mobile range and called up the police and university officials," news agency IANS quoted him as saying.

The Raigad police along with National Disaster Response Force teams from Pune and local Mahabaleshwar hikers-trekkers groups are engaged in a massive operation to retrieve the bodies from the ravine fighting heavy rains, with clouds descending on the thickly forested valley and hills.

Deep below in the ravine, the remains of the bus lie as a crumpled heap of metal, with bodies of the passengers strewn around or stuck in trees and bushes.