Digvijaya Singh said, "The day he decides, no one will be able to stop him," on Rahul Gandhi's political journey. 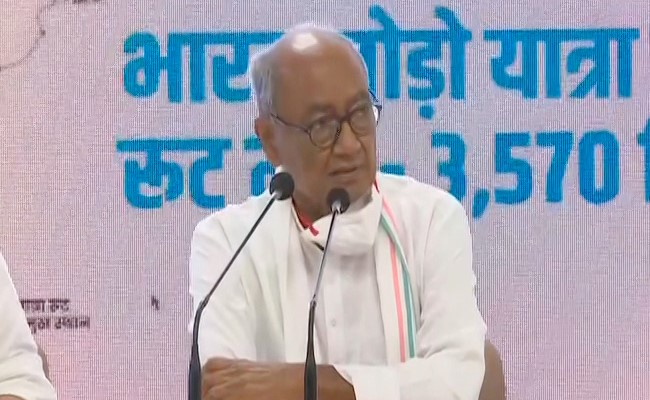 Digviijaya Singh recently dropped out of the race for the post of Congress president. (FILE)

Rahul Gandhi has become a symbol of 'Bharat jodo' (unite India) and will be seen in a new avatar post the Congress' pan-India march, senior party leader Digvijaya Singh said on Sunday.

In an interview to PTI, the veteran Congress leader also spoke about the weaknesses of the party and efforts to overcome them.

What is missing in this party is the commitment to ideology and leadership, he rued, adding that Congress has also been giving "confusing signals".

"One of the major weaknesses of the Congress party is that it works in silos. There is no horizontal integration of all Congressmen at the cutting edge, which is the grassroots, at the ground level. We have attempted this in this yatra. This is the format that we are preparing," he said.

Mr Singh also hit out at some Congress leaders, saying there are a few who are experts in all-India politics but have not ventured out of their homes in Delhi.

The former Madhya Pradesh chief minister, who has been a part of the Bharat Jodo Yatra since it started from Kanyakumari, said that the march has definitely impacted the Congress positively as it is for the first time after many years that the grand old party is being discussed in remote areas and villages.

"People are very impressed that Rahul Gandhi is walking all the way," he said adding the yatra has revived the interest of the masses and the media in the Congress and will help strengthen the party.

Rahul Gandhi is spearheading the yatra that began in Kanyakumari and will end in Jammu and Kashmir. A host of Congress leaders will walk for 3,500 km during the march.

"In this country, if anyone does 'tyag' (sacrifice), he is always revered. Sonia Gandhi did 'tyag' of the prime minister's post. And here, Rahul Gandhi is walking, sweating in the heat, standing in the rain, fighting all kinds of fake news and defamation. He has become a symbol of Bharat jodo," the former Madhya Pradesh chief minister said.

Asked how the yatra helped Rahul Gandhi, Mr Singh said, "Well, you shall see him now in his new avatar." The 75-year-old leader said he has known Rahul Gandhi for a long time and the former Congress president is a person of strong resolve.

"The day he decides, no one will be able to stop him," he said on Rahul Gandhi's political journey forward.

"Frankly, I have always seen him as a very highly committed and ideologically committed person with a highly inquisitive mind. He would not let you go until he has his answers. And, he is prolific and very spiritual too," the veteran Congress leader said.

Mr Singh, who has dropped out of the race for the post of Congress president and became proposer for party veteran Mallikarjun Kharge, noted that the Congress is "extremely poor" as an organisation as compared to the BJP, which is a cadre-based party.

"Obviously, new leadership will emerge from the party," he said, adding those who are taking part in the march have left their homes and showing their commitment.

Elections for the Congress president's post will take place on October 17 and results will be announced on October 19.

Talking about the yatra, he said they have appointed coordinators for every state and district and the party's frontal bodies and cells are also doing so, which will help strengthen the organisation structure at the grassroots level.

He said party leaders have been assigned identifiable tasks, will visit many households and provide feedback.

"The biggest achievement of the yatra is that the media is looking at us now," he said, adding Congress workers "are out of their homes, in the streets and on the roads now".

The party veteran, who has played an important role in the organisation for a long time, said he is amused that the BJP is criticising it.

Asked what would be his advice to detractors of Rahul Gandhi and the party, he said, "Take a walk".

Asked if a "new Digvijaya Singh" would emerge from this yatra, Mr Singh said he remains "a humble, down-to-earth Congress worker".

Citing seven defamation cases filed against him, he said whether he is in a position or not, he walks on the streets and fights.