Describing Sushma Swaraj as an extraordinary parliamentarian and a gifted orator, Rahul Gandhi said he was deeply saddened by her death. 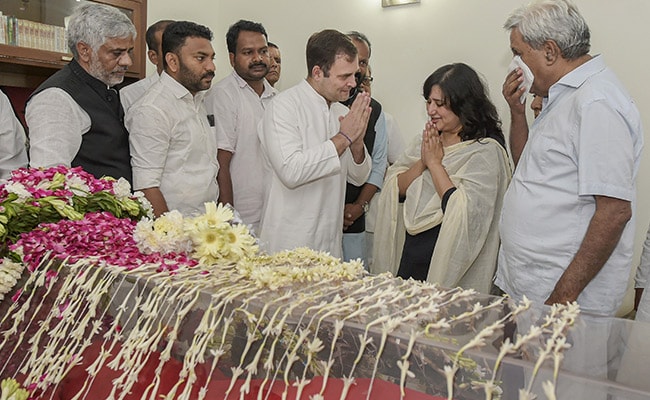 Congress leader Rahul Gandhi on Wednesday wrote a letter to Sushma Swaraj's husband Swaraj Kaushal, a day after the former Foreign Minister and BJP leader died following a cardiac arrest, saying that her legacy will live on and continue to touch the lives of millions of Indians.

Describing Sushma Swaraj as an extraordinary parliamentarian and a gifted orator, Mr Gandhi said he was deeply saddened by her death.

"We have lost an extraordinary parliamentarian and a gifted orator," Mr Gandhi said.

"In her first stint as the external affairs minister, her responsiveness and compassion, for people in need, won her the respect of people around the world. Even her personal ailments did not diminish her public spiritedness," he said

Sushma Swaraj was cremated with state honours this afternoon in the presence of top leaders including Prime Minister Narendra Modi, Home Minister Amit Shah and BJP patriarch LK Advani among others. The 67-year-old's death on Tuesday night at Delhi's AIIMS hospital left political leaders and her legions of admirers in grief. PM Modi turned emotional this morning as he paid homage to Sushma Swaraj, easily one of India's most-admired political leaders.

Sushma Swaraj had not been keeping well lately, which is why she had not contested the Lok Sabha election earlier this year and opted out of PM Modi's new government. She had a kidney transplant in 2016.