Sadhvi Pragya claimed that she had placed a curse on Mr Karkare because he dared launch an investigation into her alleged involvement in the Malegaon blasts. 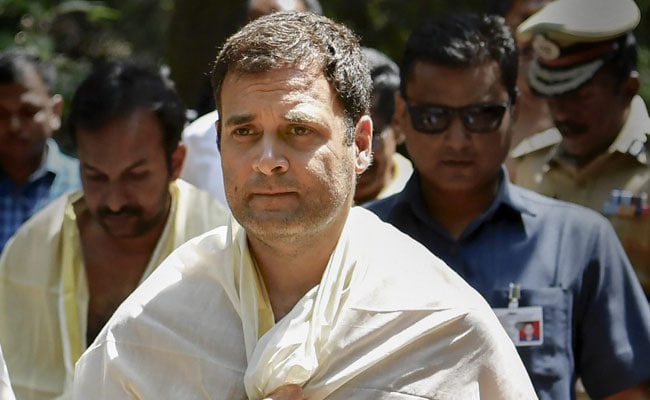 Rahul Gandhi said Hemant Karkare should be treated with respect because he gave his life for the nation.

Hours after BJP politician Sadhvi Pragya Singh Thakur claimed that Maharashtra police officer Hemant Karkare died fighting terrorists during the 26/11 attacks because she had "cursed" him, Congress president Rahul Gandhi today cautioned against disrespecting a person who served the nation at the cost of his life.

"Hemant Karkare gave his life protecting India. He must be treated with respect," Mr Gandhi said in a tweet.

Sadhvi Pragya, who is being fielded by the BJP from Bhopal in the ongoing Lok Sabha elections, claimed that she had placed a curse on Mr Karkare because he dared launch an investigation into her alleged involvement in the Malegaon blasts. The incident had resulted in the death of six people on September 29, 2008.

Even as criticism against Sadhvi Pragya continued to flow in from all quarters, the BJP distanced itself from the remark but said that it may have been driven by her experiences in jail. "The BJP considers Hemant Karkare a martyr. This is Sadhvi Pragya's personal statement which she might have given because of the mental and physical torture she had faced," a statement issued by the party read.

Sadhvi Pragya also apologised later in the evening, saying: "I take back my words."

But opposition leaders continued to criticise her, with some like Punjab Chief Minister Amarinder Singh and Peoples Democratic Party chief Mehbooba Mufti even questioning her sanity.

"If Sadhvi Pragya is so scarred from all the physical & mental torture endured, on what grounds has she been deemed fit to fight an MP election? How is the BJP okay with sending a mentally unsound person to Parliament? Stop justifying her diatribe?" asked Ms Mufti. Amarinder Singh, for his part, claimed that the BJP candidate had dragged patriotism to a new low by "attacking a decorated officer who sacrificed himself to fight terrorism".

While Karnataka Congress leader Siddaramaiah picked on Sadhvi Pragya for advocating superstitious beliefs by talking about curses, the Aam Aadmi Party maintained that nothing short of an apology from the BJP would suffice.

The Indian Police Service Association also came out strongly against Sadhvi Pragya's remarks. "Ashok Chakra awardee late Hemant Karkare, IPS, made the supreme sacrifice fighting terrorists. Those of us in uniform condemn the insulting statement made by a candidate and demand that sacrifices of all our martyrs be respected," it said in a tweet.

Mr Karkare had posthumously received the Ashok Chakra, the country's highest peacetime gallantry award, for his contribution towards fighting terror.