The Supreme Court said the technical panel appointed by it to probe the unauthorised use of Pegasus has found some malware in five mobile phones out of the 29 examined but it could not be concluded that it was due to the Israeli spyware. 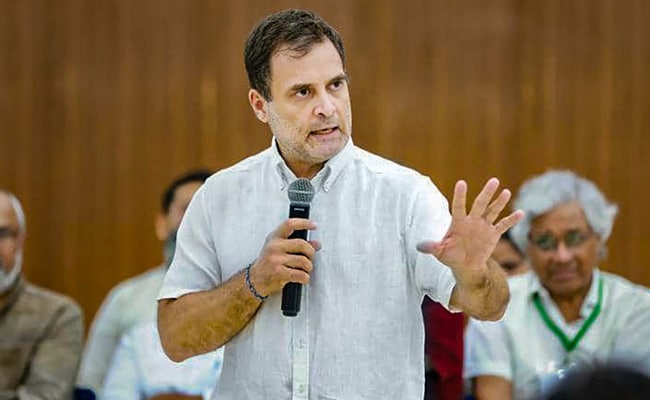 The Congress and the BJP traded barbs on Thursday over the Supreme Court's observations in the Pegasus matter with the Opposition party alleging that the government's "non-cooperation" was an acceptance that it had "something deeper to hide" and the ruling party asking Rahul Gandhi to apologise for his charges.

The top court said the technical panel appointed by it to probe the unauthorised use of Pegasus has found some malware in five mobile phones out of the 29 examined but it could not be concluded that it was due to the Israeli spyware. After perusing the report submitted by former top court Justice R V Raveendran, Chief Justice N V Ramana also noted that the Central government did not cooperate with the Pegasus probe.

"PM and his government's non-cooperation with the SC appointed committee is an acceptance that they had something deeper to hide and want to crush democracy," Rahul Gandhi said in a tweet.

PM and his govt's non-cooperation with the SC appointed committee is an acceptance that they had something deeper to hide and want to crush democracy. #Pegasus

The BJP claimed that the opposition's attack on the government over the Pegasus issue was all part of a "motivated campaign" aimed at weakening and defaming Prime Minister Narendra Modi and the country.

BJP leader and former Union minister Ravi Shankar Prasad wondered if Rahul Gandhi and the Congress will apologise after the Supreme Court-appointed panels found some kind of malware in five mobile phones.

He claimed this has exposed the disinformation campaign of those who had accused the government of using the spyware to snoop on politicians, including the BJP, and others.

Opposition parties, so-called intellectuals, some NGOs and a section of the media ran a sustained campaign against the government, Mr Prasad told a press conference.

He also alleged that Congress has so much animus against Modi and his government that it resorts to falsehood to expand the party but ends up shrinking further after its lies are exposed.

The Congress should take on the BJP in elections and not through such "sponsored" campaigns, he said, noting the ruling party has constantly prevailed over its rivals in polls.

He cited the Congress campaign against the government over the issue of Rafale aircraft purchase and the Central Vista project and noted that the Supreme Court found no irregularities in them.

"Will Rahul Gandhi and the Congress apologise," he asked, noting that the opposition leader had levelled charges like treason against the prime minister for alleged surveillance of his colleagues and opposition leaders using Pegasus.

Addressing a press conference at the AICC headquarters here, Congress spokesperson Gourav Vallabh said, "Everybody knows this weapon was used and it dented democracy.

"This weapon is against the law and Constitution. How can they (the government) answer? Sometimes not answering is also an answer, the government has made it clear (by not giving answers) that they used Pegasus against democracy." By staying silent, the government has "made it clear that it used the Pegasus spyware against Rahul Gandhi, other opposition leaders, scientists, election commissioner, registrar of the Supreme Court, civil society activists and senior journalists", he claimed.

"I hope the Supreme Court will treat this not giving of answer as an answer and take strict action against the government in this matter. We have been asking from day one why did the government use Pegasus and under what law," he said.

Vallabh questioned how a weapon which is used against terrorists and enemy of the state was used by the government "to weaken democracy, executive and the judiciary".

"That is a weapon to dent our democracy, Constitution," he said.