"If We Get Hold Of Nirav Modi, Will Give His Money To Poor": Rahul Gandhi

On Saturday, Nirav Modi, one of the main accused in the multi-million PNB scam, was traced living in an 8-million pound apartment in London's posh West End locality. 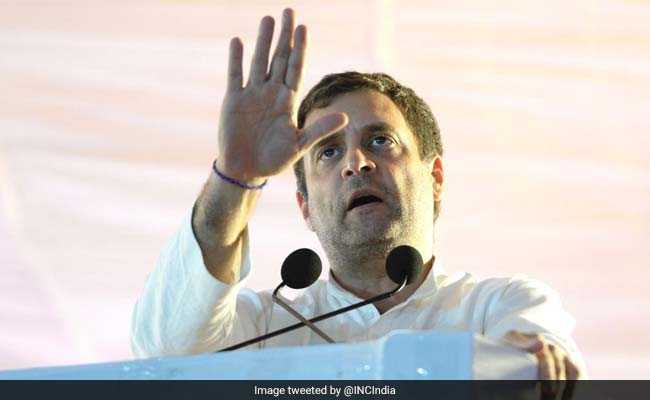 Rahul Gandhi made the remarks at a rally in Telangana.

Congress president Rahul Gandhi on Saturday said if the Congress "gets hold" of diamantaire Nirav Modi, it will give all the money belonging to businessman to the public.

On Saturday, Nirav Modi, one of the main accused in the multi-million PNB scam, was traced living in an 8-million pound apartment in London's posh West End locality.

In a video published by a British newspaper The Telegraph, it was also revealed that Nirav Modi has started a new diamond business in Soho.

Meanwhile, the Congress president promised guaranteed minimum to all citizens if the party came to power in the Lok Sabha polls 2019.

"The Congress party has always taken historic decisions and we are going to do historic work in 2019. We have decided to give guaranteed minimum income to all," Mr Gandhi said.

Continuing his tirade against the Prime Minister, Mr Gandhi alleged that PM Modi is making "two Indias" - one for the poor and the other for wealthy and rich people.

"For the last 5 years, he (Modi) is making two Indias - one is of wealthy people like Anil Ambani who travel in private planes and achieve what they like. While in second India, farmers beg with folded hands for loan waiver while Finance Minister Arun Jaitley says that there is no policy of waving farm loans," he said.

"Narendra Modi is aware of KCR's corrupt practices. He has the remote to control KCR," Mr Gandhi alleged.