The first video will be out at 10am on Monday on all his social media channels, Rahul Gandhi wrote to his 15.8 million followers on Twitter. 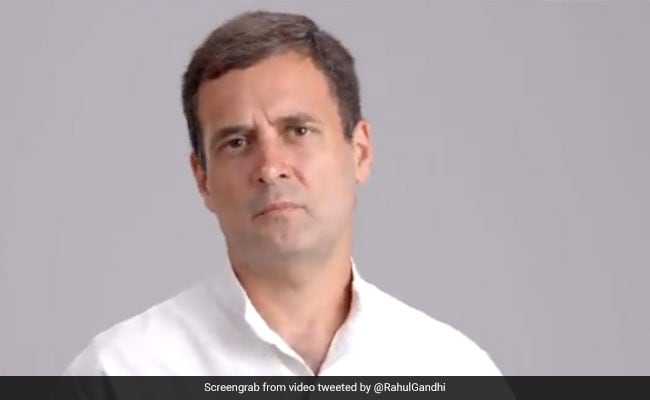 Congress leader Rahul Gandhi took to Twitter today to announce a video series on "how the Modi government has destroyed the Indian economy" with a short clip where he states how demonetisation, "flawed GST" and the coronavirus lockdown have hit the national economy.

The first video will be out at 10am on Monday on all his social media channels, Mr Gandhi wrote to his 15.8 million followers on Twitter.

In a short video that accompanied the tweet, the Congress MP said the BJP government has attacked the unorganised workforce in India.

"I will give you three big examples right now - demonetisation, flawed GST and the lockdown," Mr Gandhi, 50, said in the 26-second clip.

Watch my video series on how the Modi Govt has destroyed Indian economy.

First video tomorrow at 10am on all my social media channels.

Rahul Gandhi has been critical of the central government's handling of the economy. The centre said Thursday the coronavirus pandemic has hurt goods and services (GST) collection and the shortfall is Rs 2.35 lakh crore for fiscal 2021. Finance Minister Nirmala Sitharaman called the pandemic "an act of God" and an unforeseen factor that affected GST collections which was met with a sharp retort from the former Congress chief.

Rahul Gandhi hit out at Ms Sitharaman's remarks on Friday reiterating the same points by saying the economy has been "destroyed" by three actions of the government-- demonetisation, "flawed" GST and a "failed" lockdown.

Days ago, the Wayanad MP had also said "distractions through media won't help the poor" as he took a shot at the centre about the Reserve Bank of India's warning on economic contraction.

He had made a few suggestions as well.

"Government needs to: Spend more, not lend more. Give money to the poor, not tax cuts to industrialists. Restart economy by consumption," Mr Gandhi had tweeted in yet another relentless attack on the government over the handling of the coronavirus pandemic which has badly affected the economy.