Rahul Gandhi Letter Updates: Mr Gandhi quit as Congress president on May 25, days after leading the party to its second national election drubbing. 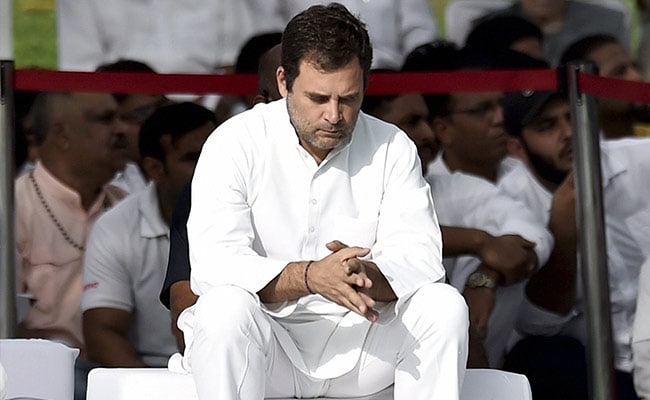 Raehul Gandhi letter: "It was an honour to serve the Congress party," he tweeted

As Rahul Gandhi stepped down as Congress chief, party sources indicated today that a new president will be chosen "within a week". Mr Gandhi told reporters that the party should choose a new president "quickly and without further delay" and that he was not part of the process at all as he had already resigned.

"It was an honour to serve the Congress party," Rahul Gandhi tweeted today along with a letter.

Rahul Gandhi said the Congress Working Committee (CWC), the party's top decision-making body, should call a meeting at the earliest and decide on a new chief.

Rahul Gandhi quit as Congress president on May 25, days after leading the party to its second national election drubbing.

Here are the Live Updates of this big development:

After Rahul Gandhi, Congress Top Job May Go To Sushil Kumar Shinde Or Mallikarjun Kharge
After Rahul Gandhi, the Congress may choose between Sushil Kumar Shinde and Mallikarjun Kharge as new party president."
Jul 03, 2019 18:10 (IST)
Congress leader Sachin Pilot on Rahul Gandhi's resignation:
Rajasthan Deputy Chief Minister Sachin Pilot reiterated Rahul Gandhi's contribution to the Congress party and told news agency ANI that his leadership is important for the party. He also said that he hopes Mr Gandhi will take back his resignation and resume his duties as party president.
Jul 03, 2019 17:59 (IST)
Rajasthan Chief Minister Ashok Gehlot owned responsibility for the party's poor showing in the state in the national election on Monday, hours before Chief Ministers of Congress-ruled states were to meet Rahul Gandhi. After the meeting, Mr Gehlot said Rahul Gandhi has listened to them carefully "and now he will decide on it... we hope there will be a positive decision".
In a series of tweets earlier, Mr Gehlot he also said only Rahul Gandhi can "lead the party in the current scenario, his commitment towards well being of our country and countrymen is un-compromised and unmatched".
Mr Gandhi had also expressed unhappiness about senior leaders and Chief Ministers who fielded their sons in the election and confined themselves to their campaign, instead of working for the party campaign across the state.
Jul 03, 2019 17:57 (IST)
Key leaders of the Congress had stepped down last week following the example of Vivek Tankha, the Rajya Sabha member who quit the party post to give Rahul Gandhi "a free hand". Two working presidents of the party in Delhi and Telangana and 120 other office bearers across the country have put in their papers. Many of them had said they would not withdraw their resignation until Rahul Gandhi promised to stay on as the Congress chief.
Mr Gandhi's announced his resignation days after the national poll results. It had not been accepted by the party. But he had refused to reconsider despite repeated appeals.
Jul 03, 2019 17:54 (IST)
Senior Congress leader Motilal Vohra on Rahul Gandhi's resignation:
"Ever since Rahul Gandhi took over the party in 2017, Congress has fared very well in every state and has become strong be it Rajasthan or Madhya Pradesh or Chhattisgarh. Rahul Gandhi left no stones unturned during the Lok Sabha elections."
On asked about whether he will be interim president of the party, the 90-year-old said, "I have no idea about this, people have been asking me this, but I have no idea about this."
On the Congress Working Committee meeting, Mr Vohra said all decisions will be taken at the meeting and said does not know when the meeting will be held. 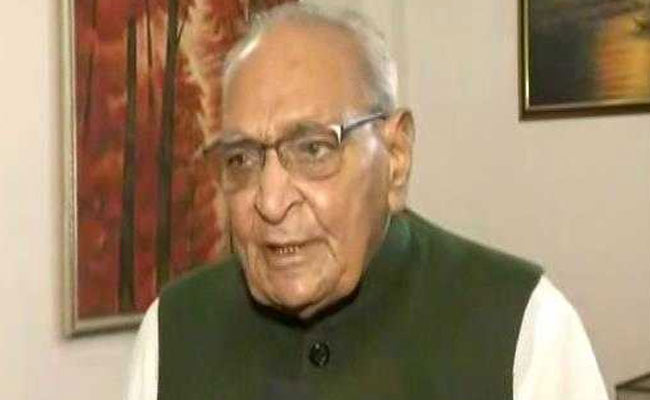 Rahul Gandhi's Open Letter Full Text: At Times, I Stood Completely Alone...
Congress president Rahul Gandhi on Wednesday listed out reasons for resigning as the party president in a letter he shared on Twitter."
Jul 03, 2019 17:08 (IST)
Rahul Gandhi described himself as a "loyal soldier of the Congress" and a "devoted son of India", vowing to continue serving and protecting the country.
Jul 03, 2019 16:43 (IST)
"Ajeeb dastan hai yeh, kaha shuru kaha khatam. This is for the party to decide. BJP has nothing to do with this political drama." -- Mukhtar Abbas Naqvi on Rahul Gandhi.
Jul 03, 2019 16:30 (IST)

In an open letter #RahulGandhi said why he resigned as Congress President.

Rahul Gandhi Resigns: Rahul Gandhi Says Thank You In Open Letter After Saying He's Not Congress Chief
Rahul Gandhi said today it was "an honour to serve the Congress party" in a letter he tweeted hours after declaring that he was no longer the party president."
Jul 03, 2019 16:25 (IST)
Rahul Gandhi also tweeted a 4 page letter expressing gratitude to the country: 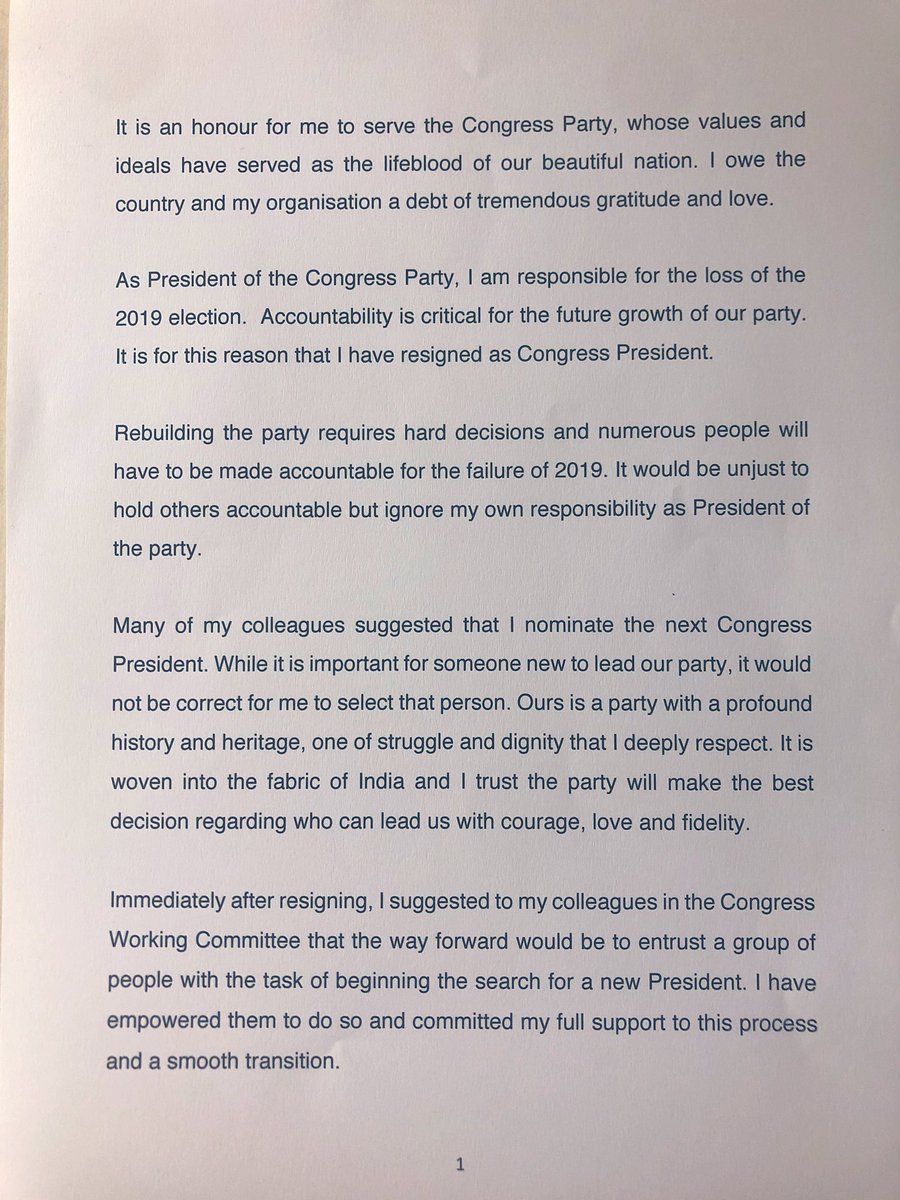 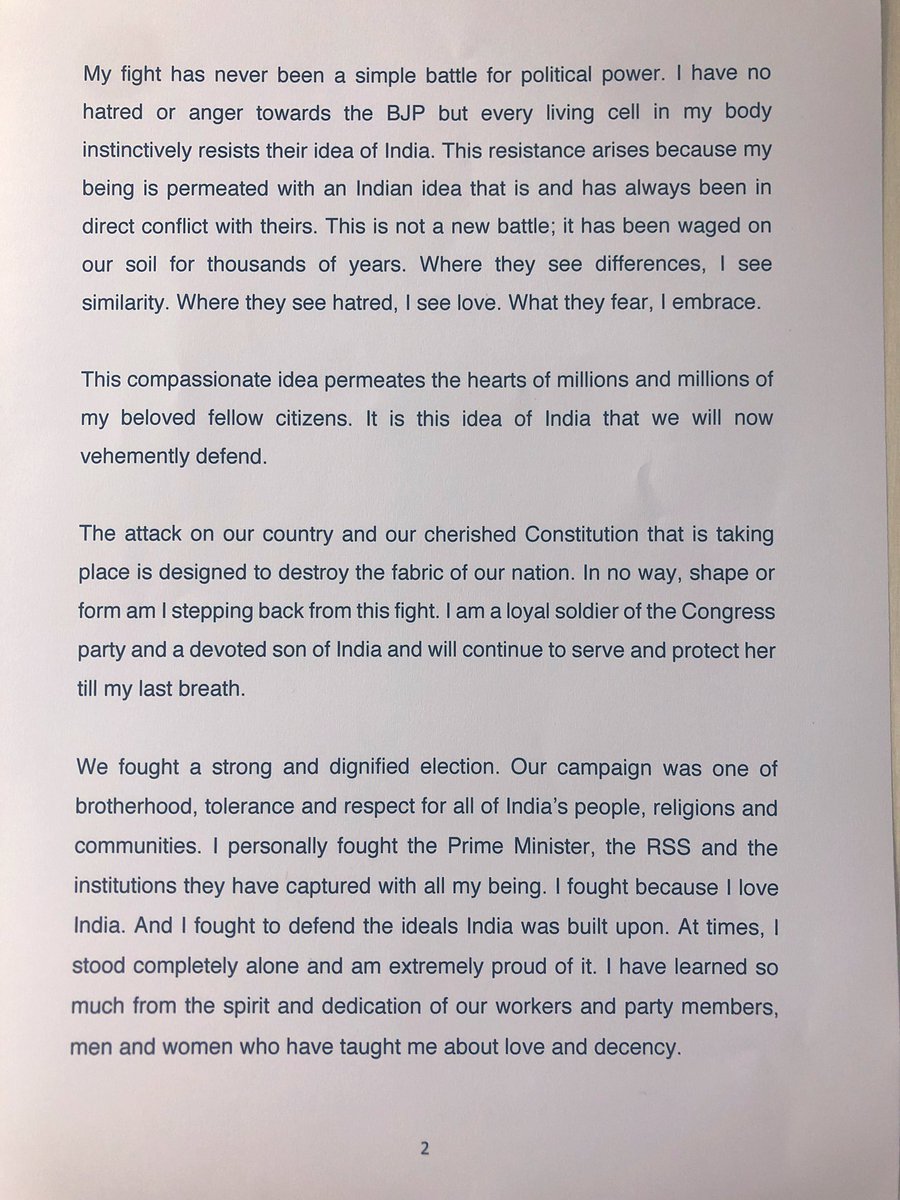 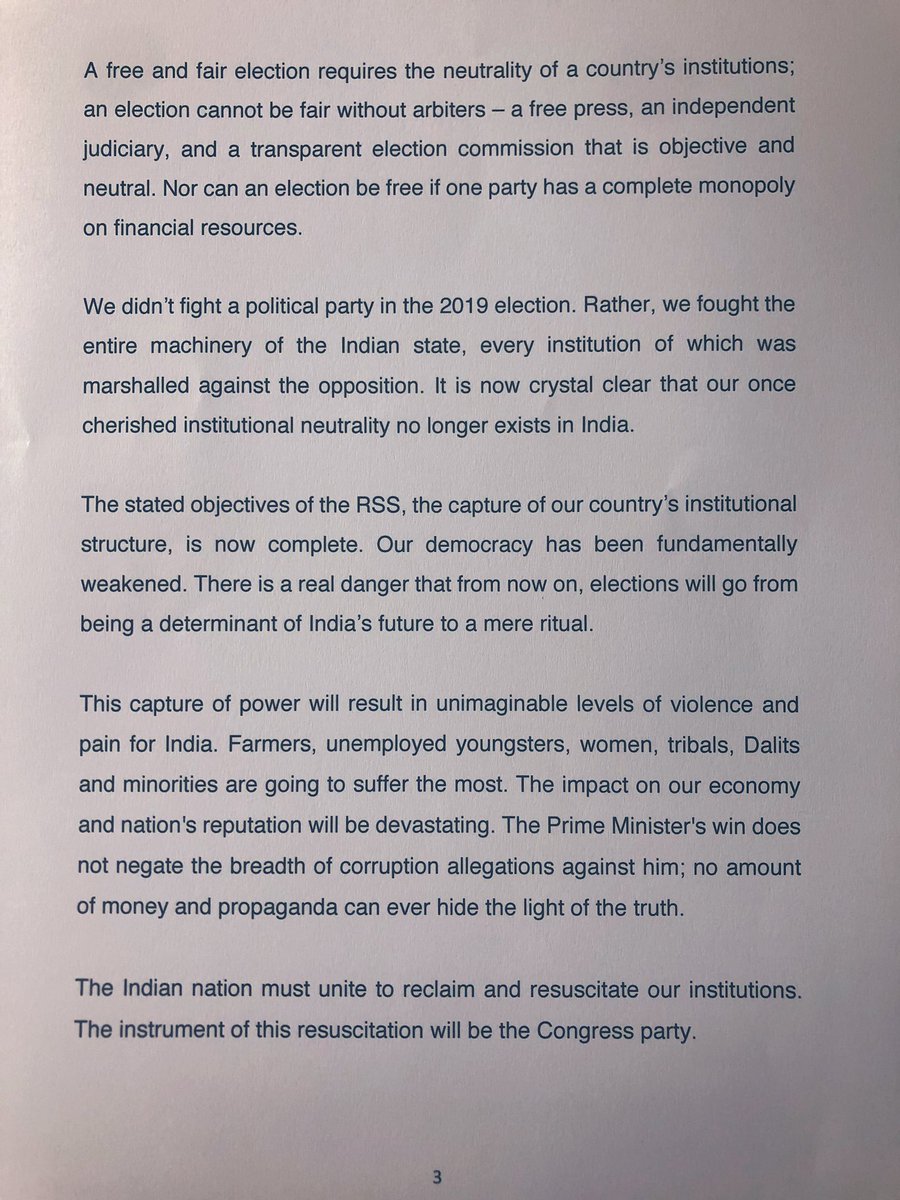 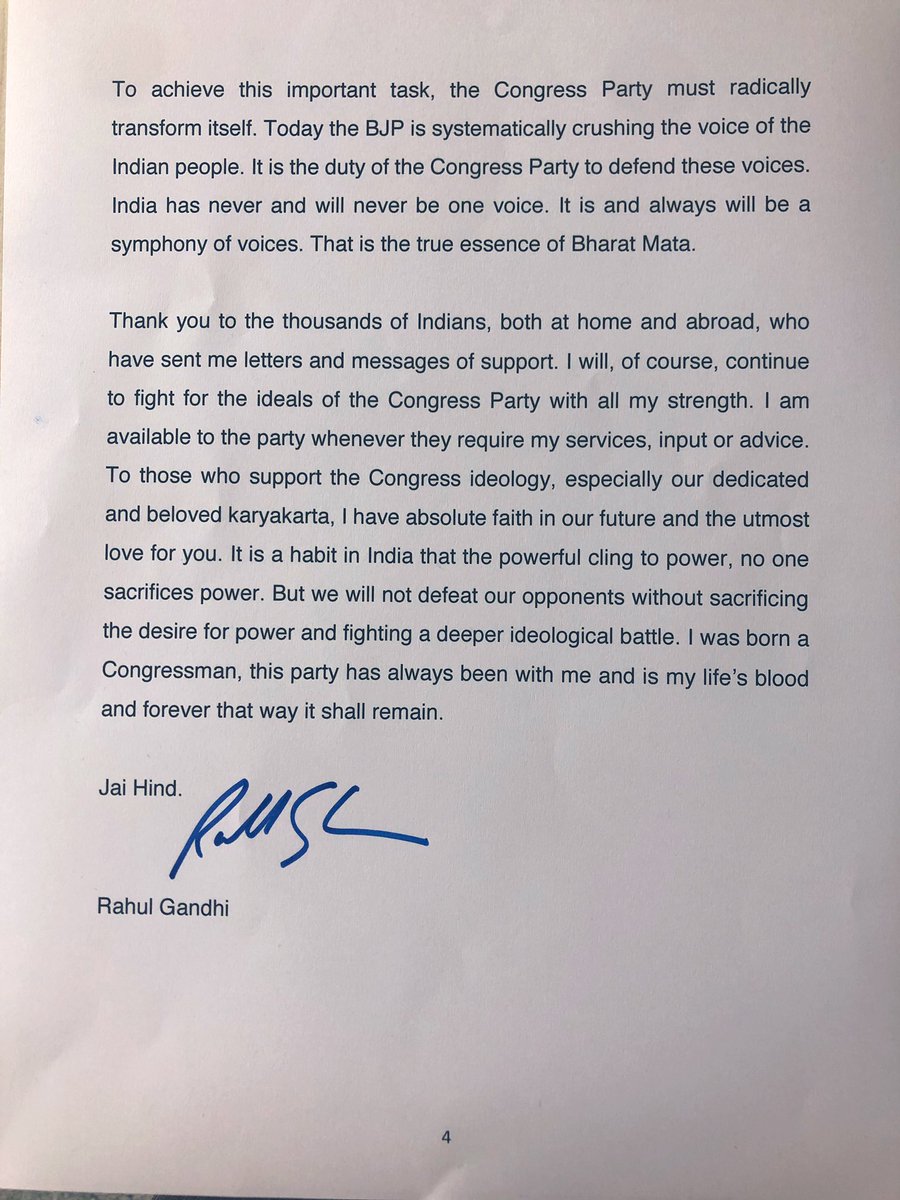 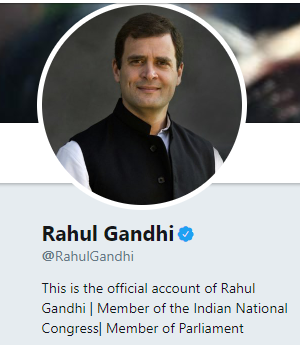 Jul 03, 2019 16:21 (IST)
Rahul Gandhi tweeted: "It is an honour for me to serve the Congress Party, whose values and ideals have served as the lifeblood of our beautiful nation. I owe the country and my organisation a debt of tremendous gratitude and love. Jai Hind"
Jul 03, 2019 16:06 (IST)
Rahul Gandhi said the Congress Working Committee (CWC), the party's top decision-making body, should call a meeting at the earliest and decide on a new chief. He reiterated what he had told NDTV earlier, that he was "not going to get involved in the process as it would complicate things". He also said he would continue to be in the party and would continue to work.
Jul 03, 2019 16:06 (IST)
"The party should decide on the new president quickly without further delay, I'm nowhere in this process. I have already submitted my resignation and I am no longer the party president," said Rahul Gandhi, 49, after repeatedly refusing to back down on his resignation despite his party leaders pleading with him.
Rahul GandhiCongress PresidentRahul Gandhi quits