Rahul Gandhi In Gujarat LIVE: To Interact With Traders, Industrialists In Rajkot

After covering Saurashtra in this visit, Mr Gandhi will campaign in north, central and south Gujarat at later dates to take the Congress campaign forward ahead of Assembly elections later this year. The dates for the Gujarat Assembly Election are yet to be announced. 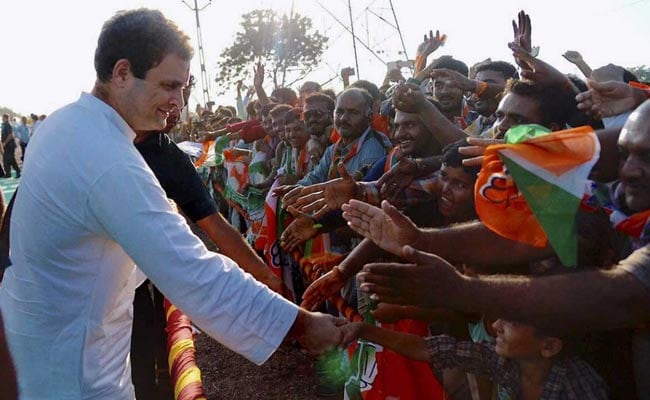 Rajkot: Congress vice president Rahul Gandhi, on a three-day visit to Gujarat, is scheduled to visit Tankara and Dhrol in Jamnagar district and Wankaner in Morbi district today - the second day of his tour. Mr Gandhi will then travel to Rajkot, where he is scheduled to interact with traders and industrialists in the afternoon. On the first day, Mr Gandhi began his visit to the poll-bound state from Gujarat's Saurashtra region. He was welcomed by Hardik Patel. After a rally in Dwarka, Mr Gandhi interacted with farmers and traders before addressing a public gathering in the afternoon. From there he traveled to Jamnagar, where he stayed for the night. On day three, Mr Gandhi will proceed to Chotila, Jasdan, Virpur, Jetpur and other towns before concluding the campaign at Khodaldham. After covering Saurashtra in this visit, Mr Gandhi will campaign in north, central and south Gujarat at later dates to take the Congress campaign forward ahead of Assembly elections later this year. The dates for the Gujarat Assembly Election are yet to be announced.

Here is Rahul Gandhi's schedule for the day as he covers these districts: 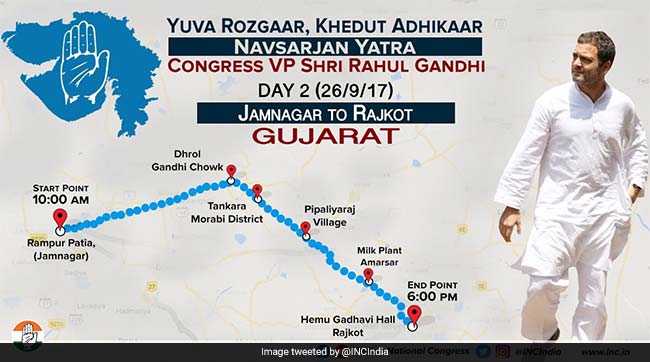 Mr Gandhi, who is on the second day of his three-day tour of Gujarat, is slated to visit several villages and towns, such as Dhrol and Tankara that have a sizable Patel population.
Sep 26, 2017 13:08 (IST)
Nowadays Gujarat government is run by remote control. it is run from Delhi, says Rahul Gandhi in Gujarat.

- Wherever you go, whatever you buy, whether its watch or clothes, it says 'Made in China'.

- Sardar Patel's statue is also being made in China.

- Whatever promises PM makes to businessmen, he fulfills them. But the promises made to the poor, youth and farmers are never fulfilled.

- Congress will waive loans, it will create jobs.

- Congress government will work in Gujarat.

Sep 26, 2017 12:44 (IST)
The Congress has coined the slogan 'Yuva rozgar kheduat adhikar' or 'Employment for youth and rights for farmers', indicating that it is trying to target youth and farmers in the region. The roadshow is covering areas that have a significant presence of the Patidar community. In fact, Hardik Patel, the 24-year-old face of the Patel or Patidar agitation in Gujarat, welcomed Rahul Gandhi in a tweet as the Congress vice-president arrived in the state.

Sep 26, 2017 12:41 (IST)
To boost the Congress' campaign for the upcoming Gujarat assembly elections, party Vice President Rahul Gandhi is on a three-day visit to Gujarat. Mr Gandhi began his roadshow after visiting the Dwarkadhish Temple in Dwarka yesterday. Today his roadshow will move through Jamnagar, Morbi, and Rajkot districts. The BJP had sharply reacted to Rahul Gandhi's Gujarat visit terming it as "dramatic and laughable". They said his campaign in the poll-bound state will boomerang on the Congress and ensure another victory for the ruling party.

"The Congress has lost elections wherever Rahul Gandhi had campaigned for the party. Under his leadership that party has lost 28 elections," state BJP spokesperson Bharat Pandya said in a release.
Sep 26, 2017 11:46 (IST)
Rahul Gandhi had yesterday attacked Prime Minister Narendra Modi over notes ban, GST, farm policies and 'Gujarat model' of development and voiced his confidence about winning the upcoming Assembly elections, claiming there is a strong undercurrent in favour of Congress in Gujarat.

"There is a strong undercurrent in favour of Congress in Gujarat. People want change and Congress will definitely come to power this time. People of Gujarat are unhappy with the ruling party as they feel cheated after giving their votes to the BJP," said Mr Gandhi, adding that Congress will help Gujarat develop.
Sep 26, 2017 11:43 (IST)
Yesterday, Rahul Gandhi wrapped his day by visiting a Navratri Pandal in Jamnagar.

Sep 26, 2017 11:41 (IST)
Congress Vice President Rahul Gandhi began his day 2 in Gujarat by meeting trader community representatives in Jamnagar who shared their concerns with him. 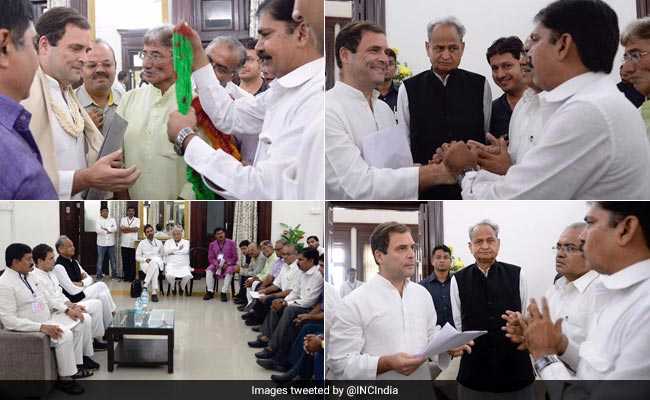