Centre's Notice To Rahul Gandhi Over Complaint About Foreign Citizenship

Rahul Gandhi Notice: He has been asked to give a "factual" reply on his citizenship. India does not allow dual nationality and only Indian citizens can contest elections.

Half-way through the national election, Rahul Gandhi has been asked by the government to respond within 15 days to a complaint that he is a British citizen. The complaint is from BJP parliamentarian Subramanian Swamy, who has for years been accusing the Congress president of lying about his nationality.

Rahul Gandhi has been asked to give a "factual" reply on his citizenship. India does not allow dual nationality and only Indian citizens can contest elections.

The home ministry notice comes after four rounds of voting for the seven-phase election in which Rahul Gandhi is contesting from the constituencies of Amethi in Uttar Pradesh and Wayanad in Kerala.

Home Minister Rajnath Singh defended the move. "If any member of Parliament raises a question in Parliament, it becomes necessary to respond to it. If any MP writes a letter to any ministry, then necessary proceedings are undertaken by the ministry. It is not a big development, it is a normal process." Questioned about the timing, he said: "No, no. this was raised in parliament also. A member of parliament has written to the ministry several times, following which action has been taken." 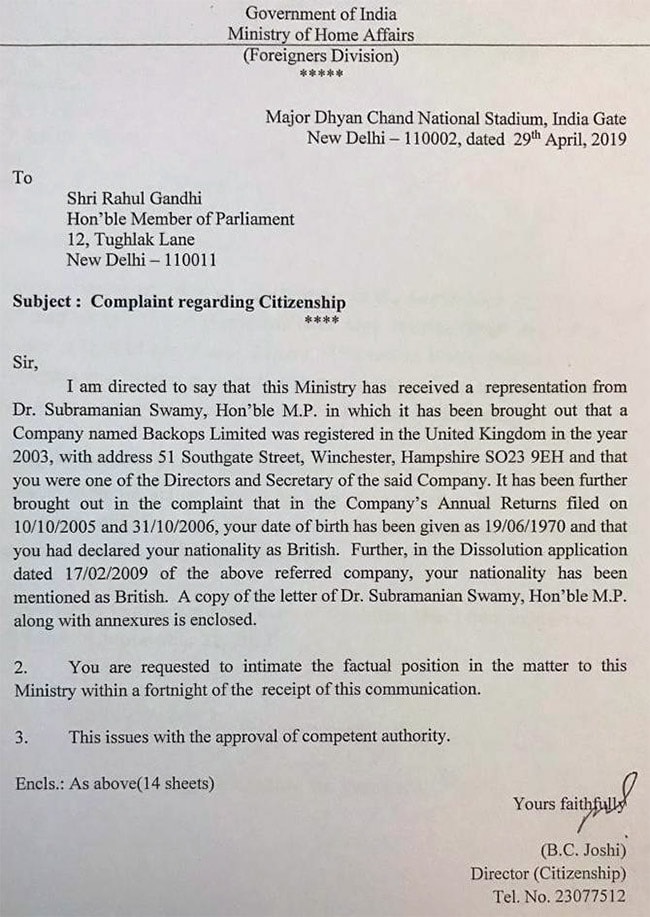 The Home Ministry, in its letter to Rahul Gandhi, asked him explain his "factual position" over complaints about his citizenship.

The notice from BC Joshi, the home ministry director in charge of citizenship, is based on Subramanian Swamy's documents on Backops, a company with which Rahul Gandhi was associated.

Mr Swamy's complaint repeats his long-standing claim that Rahul Gandhi recorded himself as British twice in annual returns filed by a now-defunct British company in which he was a director. The company was registered in 2003 and filed for dissolution in 2009.

The BJP leader has been demanding since 2015 that Rahul Gandhi be stripped of Indian citizenship as well as his parliamentary seat.

The complaint has been taken up by the government for the first time.

"You are requested to intimate the factual position in the matter to this ministry within a fortnight of the receipt of the communication," the home ministry writes.

Subramanian Swamy, a fierce critic of the Gandhis, first raised the allegation in 2015 in a complaint to the ethics committee of parliament, and has repeated it several times since.

Rahul Gandhi, in his reply to the ethics committee, had accused the BJP leader of misleading the nation and had challenged him to substantiate his claims with documentary proof. Denying ever seeking British citizenship, he also called it an "endeavour to malign my name".

The BJP's Mukhtar Abbas Naqvi said it was a "very serious question" for the president of a party. "You should be a citizen of India if you want to vote or fight the election," said the Union Minister.

The election will end on May 19 and the results will be declared on May 23.