"Beauty And The Beast": First Batch Of Rafales For India Stop Over In UAE

Rafale Deal: The Rafale aircraft will cover a distance of nearly 7,000 km from France to India with air-to-air refuelling and a single stop at a French airbase in the United Arab Emirates (UAE).

India Rafale Deal: The Indian ambassador to France interacted with the Indian pilots of the Rafale jets.

The first batch of five Rafale jets flew out of France today and will arrive in India on Wednesday, July 29, when the fighter jets will officially be inducted and join the Indian Air Force fleet in Haryana's Ambala. The fighter jets, built by French aviation firm Dassault, took off from the Merignac airbase in southern France's Bordeaux today and landed safely at Al Dhafra airbase in the UAE after a sortie of more than seven hours.

The five aircraft will be the first tranche of the 36 planes bought by India from France in a Rs 59,000-crore inter-governmental deal in 2016. 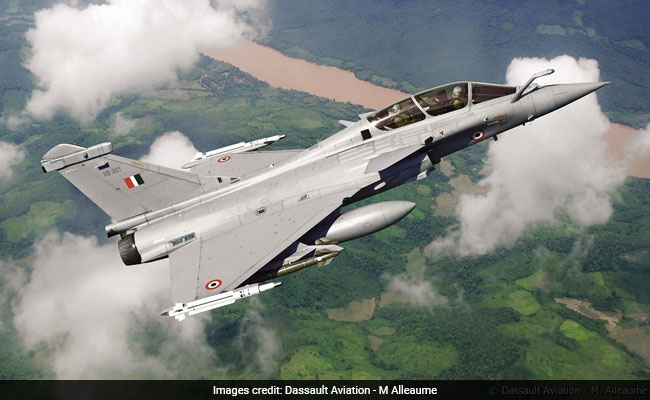 The Rafale jets will come with various India-specific modifications

The Rafale aircraft will cover a distance of nearly 7,000 km from France to India with air-to-air refuelling and had a single stop at the French airbase in the United Arab Emirates (UAE).

Bon Voyage: Indian Ambassador to #France interacts with the Indian pilots of the Rafale. Congratulates and wishes them a safe flight to India with a single hop. #ResurgentIndia#NewIndia#Rafale@IAF_MCC@MeaIndia@rajnathsingh@Dassault_OnAir@DefenceMinIndia@PMOIndiapic.twitter.com/jk3IWD9tYU

The Indian ambassador to France, Jawed Ashraf, interacted with the Indian pilots before they took off from France.

"Bon Voyage: Indian Ambassador to #France interacts with the Indian pilots of the Rafale. Congratulates and wishes them a safe flight to India with a single hop," the Indian embassy in France tweeted.

"Beauty and the Beast"- Rafale Fighter Aircraft. Ready to take off!! @DDNewslive@ANI@MEAIndia@JawedAshraf5@rajnathsingh@PMOIndia@gouvernementFR@DrSJaishankar@IndianDiplomacy@Dassault_OnAir@DefenceMinIndiapic.twitter.com/qS9w9lP6CW

The Rafale fighter jets are capable of carrying a range of highly effective weapons, including the Meteor air-to-air missile and Scalp cruise missile.

The Air Force has readied the required infrastructure to welcome the jets in its line-up.

Defence Minister Rajnath Singh, last month, held a telephonic conversation with his French counterpart Florence Parly, who assured the delivery of the first batch of plane would take place as scheduled despite the coronavirus pandemic.

Handed over to India by Dassault, the jets were kept in France as part of a training programme for Indian Air Force pilots and technicians.

Last October, Rajnath Singh had gone on a three-day tour to France to take part in the handover event at a facility of Dassault Aviation in the Merignac area of Bordeaux, around 590 km from Paris. Mr Singh had taken a 20-minute sortie in the aircraft after performed a pooja.