The European lawmakers' visit has been organised by WESTT or Women's Economic and Social Think Tank.

Twenty-three European Union MPs are on a visit to Jammu and Kashmir.

As more than 20 European Union MPs visited Jammu and Kashmir - the first international group to do so since the government ended special status to the state - the organiser of the event is in the spotlight. Emails inviting the MPs went from Madi Sharma, who describes herself on Twitter as a Social Capitalist, International Business Broker and Education Entrepreneur.

The visit, described as private, is sponsored by the International Institute for Non-Aligned Studies, a think tank, according to Madi Sharma's emails. Its office in Delhi was locked this morning.

The office of Liberal Democrat MP Chris Davies, who alleges he was dropped from the visit after he asked for unfettered access in Kashmir, shared his email exchanges with Madi Sharma with NDTV.

"I am organising a prestigious VIP meeting with the Prime Minister of India, His Excellency Narendra Modi and it is my privilege to offer this invitation to you. As you will be aware Prime Minister Modi had a land slide victory in the recent elections in India and is planning to continue on his path of growth and development for India the country and its people. In that respect, he would like to meet influential decision makers from the European Union," wrote Madi Sharma in an email on October 7, referring also to WESTT or Women's Economic and Social Think Tank, of which she is CEO and founder.

The mail said the meeting with the Prime Minister "is scheduled for October 28, the visit to Kashmir on 29 and a press conference the next day (Tuesday)". 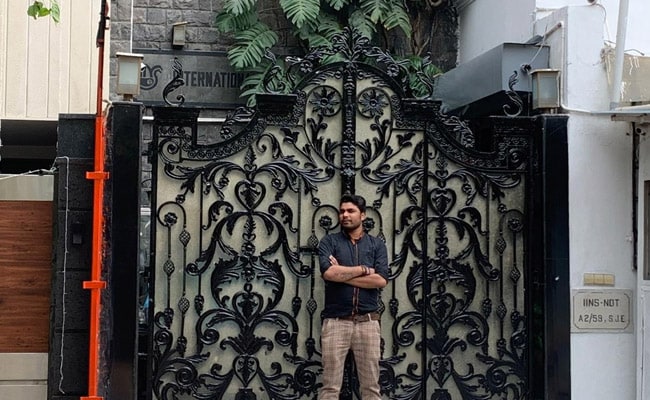 The office of the think tank that organised the EU lawmakers' visit was closed.

"The visit will be of a small group of cross party, pan European politicians on a three-day visit (flight and accommodations will be covered and are sponsored by the International Institute for Non-Aligned Studies). Your participation will be as our VIP guest and not in an official capacity as a delegation of Members of the European Parliament," said the mail from Ms Sharma.

Mr Davies wrote back the next day that he was happy to accept the invite "on the condition that during my time in Kashmir I shall be free or go wherever I wish, and talk to whoever I wish, unaccompanied by military, police or security forces, but accompanied by journalists and television crews." He asked for a guarantee in writing.

Ms Sharma replied that a "little security" may be necessary and also suggested that they meet for further discussions.

Mr Davies said when he tried to fix this appointment, he was told he could not be included in the group travelling to India.

"I apologise that I cannot take any more MEPS at this stage and therefore I will cancel our meeting for Thursday..." Ms Sharma wrote in an email on October 10.

Mr Davies claimed he was barred because he had asked to be allowed to move around freely and speak to local people. "I am not prepared to take part in a PR stunt for the Modi government and pretend that all is well.  It is very clear that democratic principles are being subverted in Kashmir, and the world needs to start taking notice," he said.

Speaking to NDTV, Mr Davies said he found the invite very unusual. "It would seem that they have government approval and they are trying to ensure that the government's message is communicated," he said.

Madi Sharma's website also says she runs the Madi Group, described as "a group of private sector and not-for-profit companies with a philosophy to create innovative ideas tailored to local action which can achieve global impacts beneficial to society".

NDTV has reached out to Ms Sharma but has received no response so far.

"Will the Prime Minister tell as to who is Madi Sharma? Why and in what capacity is Madi Sharma fixing an appointment of Prime Minister with a delegation of EU MPs on a personal visit and why is Government of India facilitating it? Where is the money to finance the entire trip coming from? Why has Ministry of External Affairs been totally sidelined? The truth is that this is the biggest diplomatic blunder in India's history," said Congress spokesperson Randeep Surjewala.

Twenty-three European Union MPs toured Srinagar on Tuesday and addressed select media today. They travelled in bullet-proof vehicles with heavy security, stayed in a five-star hotel and interacted with army officials and some local leaders. The roads were deserted and shops were shut.

This is the first such visit since the government announced the end of special status to Jammu and Kashmir under Article 370 and split the state into two union territories. Alongside the surprise announcement, hundreds of politicians in the state were detained and a security and communication lockdown was enforced to avoid any violence or protests.

Opposition leaders like Rahul Gandhi - whose delegation was turned back from the Srinagar airport - have questioned why European lawmakers were allowed amid such restrictions but opposition politicians in India were not.

AFP has reported that the European parliament and European Union hierarchy were not involved in this visit. Several European embassies in Delhi were unaware of the visit until Monday, the agency reported. It also quoted an unnamed EU official in India as saying the visit was not official and the lawmakers had come at the invitation of an NGO.

Theresa Griffin, a Euro MP for North West of England, on Tuesday tweeted that the group of far-right lawmakers visiting Kashmir "do not speak for the European Parliament", adding that the "shutdown in Kashmir must be ended and constitutional rule of law restored".