Farmer protest: Deep Sidhu would send her the videos and she would upload them from abroad, police sources have said. 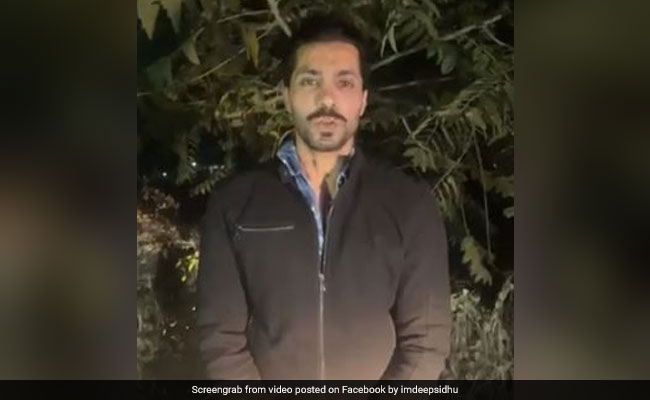 Deep Sidhu is on the run with the police announcing a reward for information on him.

The videos in which Punjabi actor-activist Deep Sidhu has been issuing clarifications and talking about the farmers' protest, especially since the January 26 tractor rally violence, are being uploaded on to Facebook by his friend abroad, police sources have said. The artiste is on the run with a reward of Rs 1 lakh having been announced for information leading to his arrest in the case.

"Deep Sidhu's Facebook account is handled by a woman friend of his. He would send her the videos and she would upload them from abroad," police sources have told NDTV.

Several teams of the Delhi police's crime branch are on the lookout for Mr Sidhu since he was accused by farmers of playing a part in instigating the violence on Republic Day in Delhi. The actor had hit back at the farmers saying, "If I'm being labeled a gaddar (traitor), then all farmer leaders are gaddars." In one of his videos, he also accused farmer leaders of "back-tracking" from the agitation.

Meanwhile, the police have also announced a reward of Rs 50,000 for information leading to the arrest four others, Jagbir Singh, Buta Singh, Sukhdev Singh, and Iqbal Singh, in connection with the violence.

A tractor rally by farmers protesting the centre's three agricultural laws went rogue on January 26 as protesters broke off the agreed route and schedule, forced their way inside the Red Fort complex, climbed the ramparts and placed a Sikh religious flag.

The farmers have alleged a conspiracy to derail their movement and have accused Mr Sidhu of leading the "conspiracy".

Case Against UP Hospital Doctor For Allegedly Harassing Woman Technician