Sidhu Moose Wala murder: Punjab police has registered an FIR on the complaint by Balkaur Singh. Charges of murder and Arms Act have been invoked in the case.

Sidhu Moose Wala: The singer's father has said several gangsters had threatened him.

Sidhu Moose Wala's father was following him in a car with two armed personnel when his killers rained bullets on the 28-year-old singer and his two friends.

Moose Wala, who died soon after, had been getting ransom calls from gangsters for a while, his father Balkaur Singh has said in his complaint to police. Punjab police has registered an FIR under charges of murder and Arms Act.

The complaint by the 28-year-old singer's father states that several gangsters had threatened him over the phone.

This included the Lawrence Bishnoi gang that has claimed responsibility for the attack.

Owing to the threats, the singer would move in a bulletproof SUV. Four armed security guards were part of Moose Wala's security cover before it was scaled down to two armed guards in the Punjab government's latest security review exercise.

The downsizing has now sparked a huge political controversy, with Opposition parties accusing the Bhagwant Mann government of endangering VIPs'

"On Sunday, my son left with his friends Gurwinder Singh and Gurpreet Singh in a Thar car. He did not take the bulletproof Fortuner and the two guards with him. I followed him in another car with the two armed personnel," Mr Singh has said in his complaint.

An SUV and a sedan were waiting on the road; each had four armed men inside, the complaint says. The men sprayed bullets at the car Moose Wala was in, it adds.

"Within minutes, the cars sped away. I started shouting and people gathered. I rushed my son and his friends to the hospital where he died," the complaint says.

Mr Singh has also written a letter to Chief Minister Bhagwant Mann, blaming the AAP-government's alleged incompetency for the incident. "Shubhdeep's mother is asking me where her son is and when he will return. What reply should I give?" he wrote in an emotional letter, adding "I hope that I will get justice." 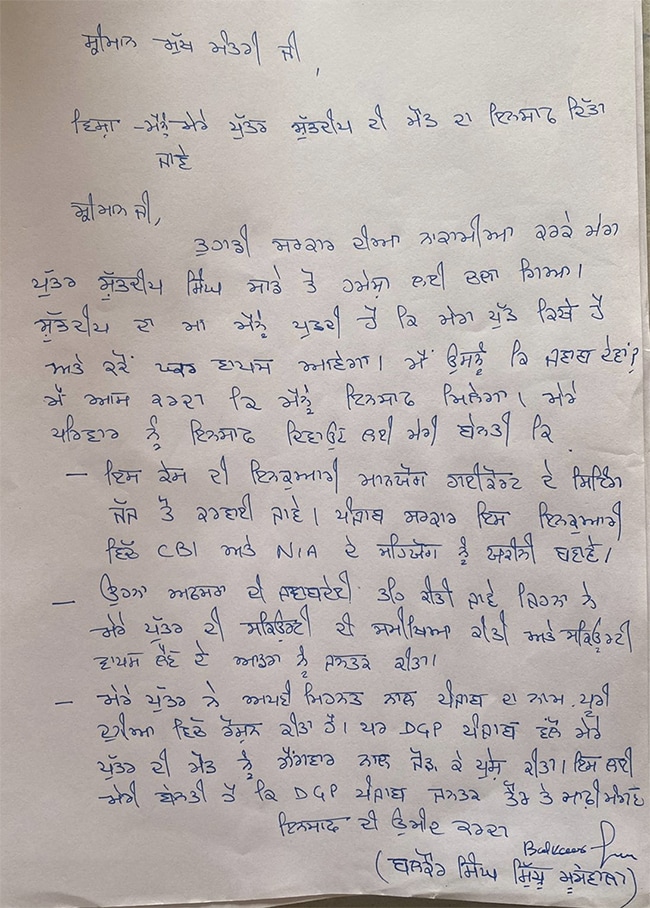 Punjab police has said that the attack seemed to be due to a gang-war.

He said the name of Moose Wala's manager Shaganpreet had figured in the murder case of one Vicky Middukhera last year. This murder appeared to be in retaliation of Middukhera's murder, he said.

Punjab Police has formed a special investigation team to probe the incident.