Punjab cabinet minister Tript Rajinder Singh Bajwa said Navjot Sidhu must sort out the issue with Captain Amarinder Singh since he called him a "fatherly figure". 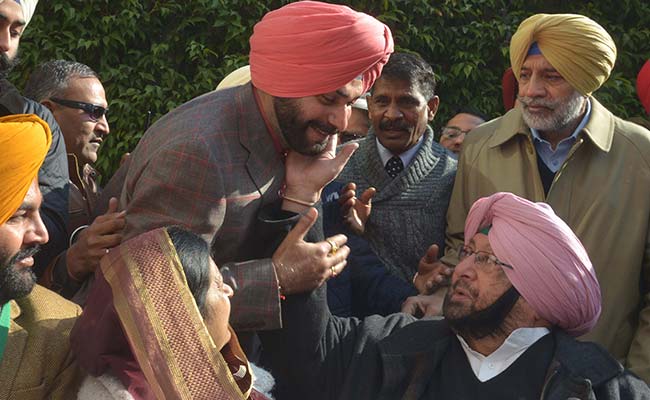 "Amarinder Singh is a fatherly figure, I love him, I respect him," Navjot Sidhu had said.

Amid controversy over Punjab minister Navjot Singh Sidhu's remark on Amarinder Singh, Punjab cabinet minister Tript Rajinder Singh Bajwa said he will sort out the issue himself since has referred to Punjab Chief minister as a "fatherly figure".

"You don't wash dirty linen in public. He (Amarinder Singh) is a fatherly figure, I love him, I respect him and will sort it out myself, Mr Sidhu said in Rajasthan.

Mr Bajwa, who is Captain Singh's loyalist, said, "He (Sidhu) has said Captain Sahib is a fatherly figure and he will sort out the issue himself. He has done a good thing. There was no fight. It is now a happy ending." He had been demanding Mr Sidhu's resignation on moral grounds after he had said his captain was Congress chief Rahul Gandhi.

Meanwhile, senior Congress leader and Rajya Sabha MP Partap Singh Bajwa appealed to Mr Sidhu and his colleagues to strengthen party president Rahul Gandhi rather than flaring up such issues.

"It is my appeal to Sidhu and other colleagues to strengthen Congress party and Rahul Gandhi. The 2019 Lok Sabha election is a challenge for the party and Gandhi is trying very hard. His hard work should not be negated...This matter should not be flared up," he said.