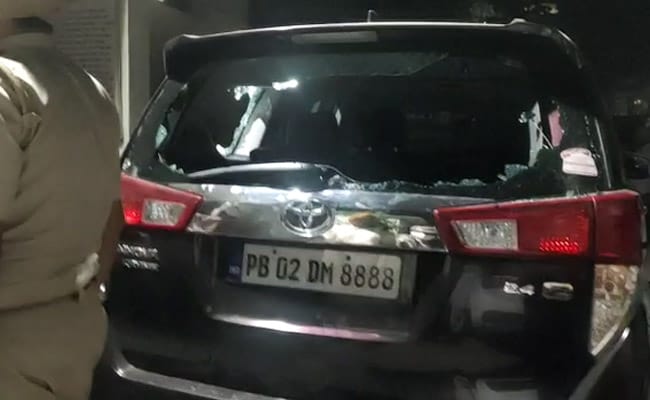 Visuals show the smashed windscreen and windows of his Toyota Innova car.

Punjab BJP president Ashwani Sharma was on Monday attacked while crossing a toll booth in Hoshiarpur district, allegedly by farmers who have been protesting against the Centre's farm laws for weeks. The leader was manhandled by the protesters as they vandalised his car. He has blamed Captain Amarinder Singh's government for the incident.

Visuals show the smashed windscreen and windows of his Toyota Innova car. His supporters later raised slogans against the Congress government in the state.

"My gunmen rescued me when I was attacked near the toll plaza. Why are policemen not deployed at the spots blocked by farmers? Even farmers should know that such anti-social elements will defame their protest," he said after the incident.

"The police are supporting those farmers who have surrounded the houses of our leaders in Punjab. Being the Chief Minister and occupying a constitutional post, Amarinder Singh claims ISI will feed on this protest, which is such an irresponsible statement. The Congress government is responsible for this attack," he added.

The Punjab government has described his allegations as "frivolous".

"There is no question of Punjab Congress's involvement in attack on BJP Punjab chief Ashwini Sharma. He and the BJP should refrain from making frivolous and politically motivated allegations. This is highly irresponsible as Punjab Police are investigating the case," Captain Singh's media advisor Raveen Thukral quoted Chief Minister Amarinder Singh as saying.

The Punjab Chief Minister has condemned the attack and has asked the state police chief to identify the culprits and take immediate action, Mr Thukral tweeted.

'There is no question of @INCPunjab involvement in attack on @BJP4Punjab chief @AshwaniSBJP & @BJP4India should refrain from making frivolous & politically motivated allegations. This is highly irresponsible as @PunjabPoliceInd are investigating the case' : @capt_amarinder 2/2 https://t.co/rci8RX0Yoj

Thousands of farmers in the state have been protesting against the three agriculture laws passed by parliament in the recent monsoon session. They have been blocking roads and railways, chocking essential supplies.

The ongoing rail blockade has severely impacted coal supply for the thermal power plants in Punjab, officials said on Saturday. The supply of other essentials like food grain, fertiliser and petroleum has also been hit.